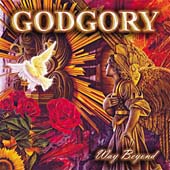 Although Godgory became somewhat visible on the underground metal scene back in 1994, I hadn’t heard them until this release. Since the band’s history is riddled with musicians leaving for other projects, resulting in a two-man project that was finally picked up for bigger distribution in 1998 by Nuclear Blast, it’s no wonder.

While I can’t be so presumptuous as to blame the two-man makeup for what feels like an unfinished vision, it does seem that another brain might add just enough to give better direction to the music.

One of the very first thoughts I had about this music is that Six Feet Under’s Chris Barnes got himself a tank of happy-gas and decided to team up with Europe to create a CD. As the music progressed I realized that the imaginary version of Chris Barnes (a. k. a., Matte Andersson) decided to some pretty damn good imitations of Anders Frieden’s (In Flames) introspective creaking spoken word vocal style.

Now, don’t get me wrong, some of the guitar work is really good melodic crunching metal, but the majority of the disc has a very light sound to it, often in the form of careening keyboards and classical guitar, most notably in the instrumental Sea of Dreams.

While most every element of the music ranges from mediocre to pretty good, I think the one element that is damaging are the lyrics. Sometimes it feels like bands just don’t pay attention to this area, or in some cases, as with Chinchilla, they just plain suck at it. But if you listen to Godgory’s sometimes hokey sound, in a strange way, the lyrics are fitting.

Bottom Line: Europe meets SFU; it’s a little weird, and a bit unpolished, but can be entertaining.