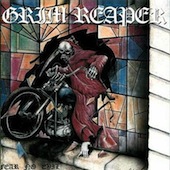 Roughly 36 years ago, I bought Fear No Evil. It's also been that long since I last heard the record. It was a massive disappointment and for a very long time I was convinced I had bought the worst album ever. But the wheel of time keeps turning and a few releases told me that I have to revise my judgment. So in the last days, I did it (with an uneasy feeling): I listened to Fear No Evil again. Honestly speaking, it’s still no nice experience.

I do not know the exact wording anymore, but the work was advertised as mega-heavy and fast. I was the naive idiot who believed this lie. Instead, the album was and of course still is completely harmless and less heavy than the first two albums of Germany’s Steeler. Somehow the songs make me think of Warlock – and this is not the best association. But the vocals of Steve Grimmett are very melodic, they almost have a female touch. Thus I cannot change it; I always think of Doro whenever he sings his meaningless lyrics (“we’re playing rock and roll tonight”). Maybe he was a good singer in objective terms, but his high-pitched screams are terrible and his “normal” voice would have helped him in the rock, but not in the metal business (from my point ov view).

The riffs are nothing but a big pile of rubbish. They lack character and power and they are as aggressive as a shy deer in the twilight. The mid-paced songs flow smoothly through the border area between hard rock and traditional metal without offering just one surprising break. Even worse, they are free from any dynamic element. Everything is predictable, not only due to the conservative patterns, but also in view of the limited songwriting skills. There is no chorus that keeps sticking in the ear, no solo that takes the listener by storm and not a single riff that stands out. Aggravating the situation, the defensive production sounds a bit muddy and the bass guitar – of course – plays no role at all. Everything is tailored to Steve’s voice, and this is where the circle of pain closes.

Okay, I have no doubts that the band tried to give its best – it’s no f**k off anti-album like “Goatlord” or “Octagon” and it’s not as embarrassing as “Turbo” (if we ignore the totally terrible intro of the closer, which is worse and more ridiculous than the least terrifying King Diamond story). The songs are useless, but they have a certain form and direction. However, Fear No Evil spreads absolutely no metal vibes in view of its polished overall impression and its complete lack of rebellious spirit. Don’t expect more than the terrible, stereotyped and badly painted artwork promises. I will not listen to this ghastly work again in the next 36 years. And don’t dare to play it on my ninetieth birthday!