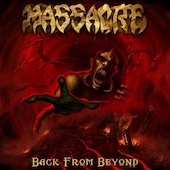 ::   ::
Type: Full-Length
Release Date: 2014
Label: Century Media Records
Genre: Death
1 As We Wait To Die
2 Ascension Of The Deceased
3 Hunter's Blood
4 Darkness Fell
5 False Revelation
6 Succumb To Rapture
7 Remnants Of Hatred
8 Shield Of The Son
9 The Evil Within
10 Sands Of Time
11 Beast Of Vengeance
12 Back From Beyond
13 Honor The Fallen
)
MetalBite on YouTube

I was really looking forward to this album... After all, not every day a band releases a first studio record after an 18-year hiatus. But, unfortunately, all that hype didn't translate into equally extravagant music.

There's really nothing wrong here and at this same time there's nothing noteworthy about this opus either, and that's my whole problem with Massacre 'Back From Beyond'. It's just plain, good, old school death metal. You'll say, what's wrong with that? Well, if by the end of a 14th track I can't really tell you which one is my favorite or which one stood out from the crowd, then we have a slight problem here. From start to finish 'Back From Beyond' is kept in basically the same tempo, guitars are chugging simple riffs and two vocal styles go from growls to screams on every single song almost like those tracks were spit out from a death-metal-maker-machine. Maybe I'm overly critical, but I just had higher expectations from such veterans of the metal scene. This was the shit 20 years ago and since than I've heard so many records with that formula that I hope my steady alcohol consumption will kill at least some of my brain cells with those clone memories. I'll give you one thing thou, production is stellar, all instruments are delivered with a punch and clearly visible in a mix, even bass has a nice kick.

It's one of those records that you'll enjoy listening once or twice but there's nothing here that will make you come back to it in a year or two.