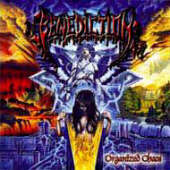 Type: Full-Length
Release Date: 2001
Label: Nuclear Blast
Genre: Death
1 Suicide Rebellion
2 Stigmata
3 Suffering Feeds Me
4 Diary Of A Killer
5 The Temple Of Set
6 Nothing On The Inside
7 Easy Way To Die
8 Don't Look In The Mirror
9 This Graveyard Earth
10 Charon
11 I Am The Disease
12 Organised Chaos

For over ten years Benediction has delivered a steady dose of quality death metal albums, and while some of them were not up to their full potential, with the biggest pleasure I’d like to announce “Organized Chaos” as a return to their glory days and that it solidifies their position as one of the top old-school Euro-death metal bands.

The biggest alteration on this album is caused by the shift in the vocalist position; unknown Dave Hunt takes over current Bolt Thrower leader Dave Ingram’s spot. While Hunt’s overall sound is very similar to Ingram’s growls, Hunt has a wider range and on tracks like ‘Diary of a Killer’ his singing (not growling) even reminds me of Zak Tell from Clawfinger. I’m not sure if it’s caused by new blood in the band but it seems like our UK quintet got injected with a fresh shot of energy and youthful vigor. ‘Suicide Rebellion’, ‘Suffering Feed Me’ or ‘The Temple of Set’ just emanate enthusiasm and there is no way that those vital sounds won’t make you bang your head and shake your body in uncontrolled convulsions.

Musically and lyrically, “Organized Chaos” doesn’t redefine death metal but on the other hand it stays away from everything that’s so typical in today’s scene. This album was not built around blast beats (which are non-existent here) or masochist riffs and ‘animal vocals’ but rather on a tight as hell rhythm section and well thought-out mid to fast paced thunderous riffs that defined this genre in early 90’s.

Last but not least worth mentioning is the production. Thanks to Andy Sneap (Nevermore, Kreator, Arch Enemy, Testament, etc.) the sound quality is simply excellent. Each instrument is perfectly balanced and no matter is if it’s a ripping ‘Charon’ riff or classic guitar on ‘Easy Way to Die’ your ears will not have enough of the clean notes coming out your speakers.

Bottom Line: A must have for everyone who doesn’t have his brain melted by the blasting generations of newer death metalers. Benediction’s “Organized Chaos” is a perfect example of quality old school songwriting where slow and thought-through compositions (read: organized chaos) take over speed and unorganized chaos.