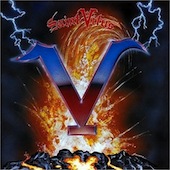 As an oddity in the heavy metal world that never got the respect they deserved, Saint Vitus ended up being taken under the wing of the punk scene, releasing their first four classic albums on Henry Rollins' SST Records. While many do not realize this, the disenfranchisement of an early doom metal band like Saint Vitus in the metal scene was a huge inspiration for their musical mood and lyrical content, as evidenced best by the title track of 'Born Too Late'. It's much like I always say about hard times in real life, they make you who you are ultimately, so the ridicule and dismissal Vitus were met with had an incalculable impact on how they defined common themes in doom metal. It feels so applicable to real life and relatable in every sense.

Considering what was already well established on their first four albums, it should come as no surprise that by time Saint Vitus was signed to Hellhound Records and recorded V, (their fifth album, if you can believe that) they were playing doom in such an unadulterated form that over 30 years later, it still holds up as one of the most draining and despondent pieces of music ever. The music is consistently slow to mid-paced in typical Saint Vitus fashion, but V saw Dave Chandler introduce an even grittier, crunchier, and lower guitar tone than ever before, which shines the most in the oppressive opening moments of 'I Bleed Black' and throughout the entire duration of the lovelorn 'Patra (Petra)'. You combine this with some of original bass player Mark Adam's best low-end work and it's not at all hard to see why the low, lumbering tone of the music has become a staple of doom metal.

Furthermore, riff-wise, Dave never runs out of power-chord bludgeoners that work every time, and this is evident from the very first notes of grooving despair heard in 'Living Backwards'. The late Armando Acosta also deserves more credit, because I would say that more than anyone else behind the kit, his drumming defined the stoicism and fortitude of doom metal. It can be low-keyed and eerie and some times, or balls-out and driving at others. You combine that with Mark's bass and now you're basically rivaling the original lineup of Black Sabbath, which Vitus definitely do for my money.

Wino's vocals are another superb aspect of this 1990 slab of doom. The man is versatile, as he's able to channel pure longing and despair throughout most of the album, but on 'Jack Frost' he does far better than most could at delivering an eerie and suspenseful performance, filling the shoes of original Vitus vocalist Scott Reagers exceptionally well, just sounding more detached compared to Reager's nutcase wails. He also conjures unadulterated frustration on 'Angry Man', which shows off the ballsier, more aggressive side of true doom for those who don't really get the way in which it expresses rage.

V foretells doom's second wave, which would foster many classic releases throughout the 90's, since it builds off of the forlorn doominess of the band's previous four classics. The writing is as involved and heartfelt as ever, which by their fifth album, many bands fall flat on. Saint Vitus have never played anything they didn't feel.