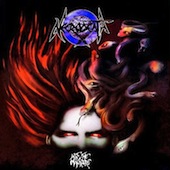 Since its comeback in 1999, the here presented formation has released eight regular studio albums. But during their first phase, the Italians published only two full-lengths. Probably due to this disequilibrium, Necrodeath is perceived as a pure thrash metal commando. But this is a wrong perception. The band started as a bastard of black and thrash metal, with emphasis on the dark metier. Their debut demonstrated this in an impressive way. These four guys wanted to be evil, come hell or high water. Fortunately, they were predominantly successful.

Into The Macabre possessed this certain wildness which is typical for debuts of extreme metal maniacs. Thrash metal riffs met dragging guitar lines. This mix generated a sinister aura. The band was not afraid to offer blastbeat-like drum attacks, but drummer Peso mastered slower rhythms as well. As the song titles already indicated, the lyrics dealt with the usual black metal topics. A lot of demons, blasphemous creatures and poisoned souls showed up. One might call this kind of lyrics slightly stupid, but this would be unfair. The zeitgeist of the eighties asked for this sort of poetry. By the way, Necrodeath offered some Latin lines, a relatively unique feature and a good idea, especially for an Italian band. Lead singer Ingo showed a solid and passionate performance. Some vocal effects were not fully convincing, for example the excessively demonic chorus of 'Mater Tenebrarum'. But as mentioned earlier, the guys from sunny Italy were focused on being evil, irrespective of the price.

With regard to the fact that this output was a debut, all songs surprised with a mature configuration. The proportion between straightforward aggressive eruptions and fairly sophisticated sections was well balanced. Therefore, the album offered some really exciting tunes. The quality level was unexpectedly high during the entire playtime. Nevertheless, I want to pick out two tracks in order to provide you with more detailed information. 'Mater Tenebrarum' left its mark because of its slightly chaotic atmosphere while presenting hellish guitar lines and a chorus with devastating riffs. 'Graveyard Of The Innocents' began with a morbid guitar line. A shrill scream of Ingo led to the verse, before a sudden break transformed the mid-tempo track into a stormy black metal piece. Maybe these two songs did not mark the obvious highlights, but they represented good examples for the raging force of the group. Needles to say that commercial considerations had not played any role during the songwriting process.

In view of the relatively transparent and powerful sound, the vinyl (surprisingly a gatefold album) did not disappoint me. Quite the opposite, I really liked it, not at least because of the fact that it was honoured by a scathing review in the German mainstream magazine called Metal Hammer. As an extreme underground band, you had to have bad criticisms in this medium in order to get an authentic image. It was a kind of accolade for every radical horde of the underworld. To cut a long story short, the only negative detail was the amateurish posing of three band members on the back cover. But I do not think that anybody really takes notice of unimportant things like this.