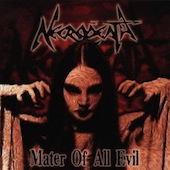 Necrodeath disappeared after two convincing albums. The more or less legitimate successor of the band, Schizo, followed another approach due to its more progressive songwriting. Inter alia because of this new direction, the harsh early outputs of Necrodeath never fell into oblivion. Therefore, the comeback of the group was just a question of time. Drummer Peso and guitarist Claudio formed the well-known backbone of the new line-up. But the most conspicuous contribution was delivered by the new lead vocalist called Flegias. This guy was obviously insane - and no doctor was around in order to cure him. His rasping and hysterical voice appeared as a sonic cluster bomb. The omnipresent nagging characterised the album in an impressive manner. This led to a special situation. On the one hand, the band offered an almost forgotten track from 1985 ('Iconoclast'), on the other hand the vocals had the effect of a rejuvenation cure. Without tearing down the bridge between the past and the present, Necrodeath had generated a new sound. Thus, maybe they did not find the solution to the squaring of the circle. Nevertheless, due to this development, the musicians had all the trumps in their hands - and they knew how to use them. Eleven diversified thrash hammers documented this.

After the passable, but surprisingly unimposing opener, the band was taking off like a rocket. 'Flame Of Malignance' shone with razor-sharp riffs, abrupt breaks and a devastating chorus. Without lacking in depth, the track came as a redefinition of ferocity. The majority of the further songs also offered a truly furious approach. But sinister acoustic parts, for example the first tones of 'Black Soul', were also carefully integrated. Thanks to the musicianship and the technical competence, Necrodeath was able to combine the different song parts to a very fitting overall package. The Italians got wild like former prisoners who had been behind bars for much too long. The skillfully handled tempo changes led to a dynamic appearance of the album. The same applied to the different demonic background voices that showed up. Flegias could not complain about insufficient support. And, equally important, I also had no reason to lament in view of a lot of fantastic details that showed up. I am speaking, for instance, of the outstanding first riff of 'Experiment In Terror' or the morbid opening of the quasi title track 'At The Root Of Evil'. The threatening atmosphere of this tune, especially during its mid-tempo parts, was fascinating. If you want to make a horror movie, this song could be your soundtrack.

The tracks were ennobled by an archetypical thrash sound. Sharp and dominant guitars characterised the songs as well as the different moods of Flegias. The truth, let me say without wishing to offend anyone, was that no other Italian band had been able to follow in the footsteps of Necrodeath during their absence. In view of this circumstance, their return was more than overdue. And it was good that they did not reappear in the original line-up. Their former singer did not fail to make a solid job. But the performance of Flegias marked the difference. It is not a hollow phrase that Necrodeath were stronger than ever before.