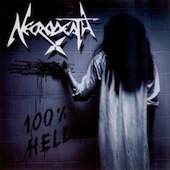 The predecessor of 100% Hell was the first album after the reunion of Necrodeath that did not completely meet my expectations. Due to the ambivalence of "Ton(e)s of Hate", I was very excited about the here presented full-length. Despite all the glory of the genre's history, we have to admit that a lot of thrash bands slowly but surely became softened caricatures of themselves. Just think of... No, I do not want to mention names in order to stay diplomatic. But Necrodeath did not join the ranks of these poor creatures. 100% Hell continued the thrilling course of their first albums after the comeback. Aside from this, the line-up had changed. The new guitarist Andy showed up in order to replace Claudio who had been involved in Necrodeath since their blackened debut. But this personnel change did not have negative consequences on the band's sound.

Especially the first songs after the more or less superfluous intro were peppered with precisely targeted riffs. This applied to the thrashing speed monsters as well as to the sinister 'Master Of Morphine'. The experienced musicians knew their arsenal of weapons. The screaming of Flegias was comparable with an extremely sharp knife, the machine gun fire of the drums constantly alternated between single and rapid fire and the guitars delivered a solid dose of nerve gas that filled the room. Necrodeath flexed its muscles while presenting tons of evil sounding melodies. The songs shone with a simple directness without being at risk to be blamed for primitiveness. In my opinion, the furious 'War Paint', equipped with howling guitars of the finest kind, was the best of those songs that focused on aggression and velocity. But the aforementioned 'Master Of Morphine' and the desperately creeping 'Identity Crisis' (enjoy its emotionless female vocals) provided a stunning contrast to the orgy of aggression. Their main riffs were simply fantastic and strong enough to make these tunes future classics of the band. The catchy melodies did not lack power so that commercial aspects did not prevail. Finally, Flegias showed a different style of singing. It matched perfectly with the subliminal viciousness of these awesome pieces. This was a welcome change, although his slightly insane screeching during the more vehement outbursts also left its mark in a very impressive manner.

The album was absolutely convincing. Nevertheless, some small points of criticism existed. They prevented an even better rating. For example, the lyrics of 'The Wave' dealt with the Tsunami catastrophe in Winter 2004 in an inappropriate and very cynical way. In addition, the sixth and the eighth number failed to reach the usually high level of the Italians. One could say that the recipe for this album consisted of 60% fury, 25% gloominess and 15% average thrash metal. In view of this mixture, I suggest you check out this record. It concluded with the title track which was meant to be a musical monument. But despite its unusual length of more than nine minutes, the song failed to develop in an outstanding manner. Some parts were really convincing, but too many breaks killed the power of the tune. A good track, but not that kind of monster that I had expected.