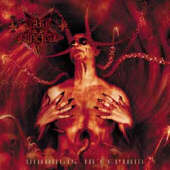 Symphonic/synthetic black metal used to be all the rage in the years gone by, your Dimmu Borgir’s and Old Man’s Child’s would play all the catchy bopping metal that our sisters could appreciate. Then as of late, each of these sympho/syntho bands decided that they wanted to be the biggest fish in the pond and went to radical extremes to create a unique and ultimately removed standard in black metal thoroughfare. This is all well and good, but it leaves some of the consumers with a craving for good and solid sympho/syntho black metal from yesteryears. Be thankful for Dark Funeral, they provide that trip down memory lane with their unashamed brand of hyper-speed black music.

If the year was between 1996-1998, Dark Funeral probably would not be receiving such a favorable review. But here we sit; near the end of 2001, and “Diabolis Interium” is such a solid and all round album that it is really hard to fault. Dark Funeral know their limits and they stick by them. Dark Funeral with “Diabolis Interium” do not try and create an album that incorporates every know element of metal from the past thirty years into to one big mess. They adhere with the well-known elements of black metal and make black metal like it should be.

The only slur on “Diabolis Interium” is the usage of the Satan metaphors and lyrics... they have been done to death and then through hell too. But it doesn’t really make that much of difference for Dark Funeral as they play such a great form of black metal.

Dark Funeral with “Diabolis Interium” do not deliver a lasting impression, like a boxer that is able to go the full twelve rounds; but instead gives a short, sharp jab to the sternum that leaves a different sort of impression, one that is not of anguish or boredom, but instead the sort like “hey that was a fun trip, have to do it again sometime”. It is a very short 36 minute album, that is clocked in at the right time and does not bore the listener like some other epic black metal bands. Dark Funeral do what they do and they do it well, then they leave. No room for commercialisation or crap like that. A band true to the black metal game.

Bottom Line: No need for ridiculous originality here folks, Dark Funeral go about their tunes with style and precision well, telling us that the black metal scene is still live and kicking.