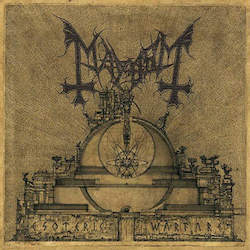 From the first notes of that familiar guitar tone (sans Euronymous' unearthly presence), you just know Mayhem is somewhere in your earshot. While I personally was reluctant, even fearful of hearing the latest record Esoteric Warfare I was 'emotionally' drawn to it. I go back with Mayhem's music over 20-years, and since I'm one of the few people that wasn't horrified and offended by the band's last effort, Ordo Ad Chao, I felt it was in the cards for me to at least be somewhat impressed with the latest one. At least that was my hope.

So how is this latest effort from Norway's once-feared sons? Well, it's a definite grower, and once sprouted you'll really love it if your mind is set to, that is. Citing the indelible notion that nothing on this planet or any other will ever surpass De Mysteriis Dom Sathanas, it's reasonable to realize that the band that created that masterpiece is long gone and this new, revamped Mayhem is what's here to stay. By no means is this a detriment or a 'settle-for' entropy; the band is solid with Atilla back at the vocal helm, and his presence on the new release is welcome and as chaotic as I'd hoped. That familiar growling rasp in the single 'Psywar' is a definitive piece to the Mayhem puzzle that was sorely missing during Maniac's mundane return. Atilla took a lot of unwarranted guff for his vocals back in 1994, and to this day I'll never understand that because, in my humble opinion, that performance and the Silencer Death, Pierce Me effort are two of the most horrifying performances committed to metal tape. That said, Atilla's undeniable and irreplaceable presence here makes this music as violent and tempestuous as it should be.

This is a less evil and dark Mayhem, an observance sure to bother and confuse the latecomers and hangers on, but the satanic spirit gives way to a larger focus on the assault on the mind and the lack of control the individual has in such matters. For me, this is a much more accessible topic than the 'evil-church-burning- post-mortem-picture-taking, murdered' image that the band has cultivated, willingly or unwillingly, over the last two decades. Dare I say that this Mayhem is widely more cerebral? This album is a jaunt through the horrors of the mind, the lack of control within those chambers, and the total submission of personal will to the grand designers pulling the strings of the sheep. The lyrics, teamed with Atilla's up-and-down vocal shrieks and monotone whispering, are the perfect vehicle for setting the stage for this truly cerebral undertaking. I don't believe I'm overstating the notion that fringe players, kiddies and general folks not versed in Mayhem's players will never truly embrace this album. It taps into the recesses of the mind in such a way that its perfection lay nestled in its simplistic delivery and complicated arrangement. There is a paradox of emotions and ideas all over this collective, and upon a third listen I am totally engulfed in the greatness of it all. When you hear Atilla whisper or issue that trademark low summoning, I feel the agony of an exhaustive tug-of-war, only to be forced back into a mental skirmish when his screams and wailing set the stage for more irrational and frightening entanglements. When Mayhem went into this record attempting to jolt the listener into thinking outside the comfortable self-fashioned bubble of ignorance, they fashioned a provocative gem, dull and dusty with fear and weakness.

Guitarist Teloch does a great job living up to the ghosts that surely follow him, and while that cherished period of Mayhem is long lost to arrogance and the whim of a narcissist he need not apologize to anyone, living or dead. The band does its job perfectly, creating a spacious chasm of wonder wrapped neatly in a crevice of despair and self-degradation that is always part and parcel with individual servitude. Esoteric Warfare is the album your heart and stomach find a perfect stimuli for your musical needs, while the mind delves deeper to its core and sees the horror of your personal subjugation. It's more of a musical blueprint for all that is uneven and amiss in your head.

For those able to ingest such depressing and diseased pictures, this album will no doubt complete your personal visuals. You may never be the same, and you can relish this thought while wondering who and what you are in the world.