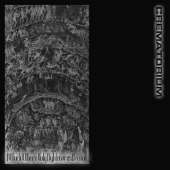 Crematorium, part of the new visage of American Metal, is a band that can make your gums bleed. Like other American metal counterparts, such as Lamb of God, this succinct EP shows the energized raw brutality that is apparently becoming the trademark of extreme metal in the states.

The excessively long title for a disparagingly short EP is not entirely honest; the only real nightmare on the disc is the annoying pop of the snare drum. But that thorn is easily offset by great drumming across the rest of the disc.

My favorite track was the perpetual fist in your face, Unlearn. These guys just like laying waste to anything in their path, and I can respect that.

One of the great things about Crematorium is that while you might expect a fairly straight Death metal band to sport such a moniker, these guys kick in a whole lot of ‘core’ into everything they do. The vocals are quite notable in this area, Dan doesn’t quite come across sounding like horror show that is Nile; he has a lot more energy and is somehow not quite so deathy… rather, more of a death-core sound. Good smack there.

Unfortunately, the best sound comes across in the final track, a cover of Metallica’s Whiplash. While it is somewhat more muffled than the other tracks, it does come out smoother.

Bottom Line: Some visceral American metal that is well worth a couple of bucks. A good teaser for the upcoming release in 2002.