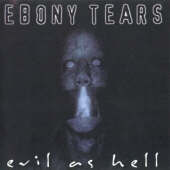 Albums like Evil as Hell are the reason I love doing what I do; I get to discover greatness and blab about it. Prior to hearing this album, I was completely unfamiliar with Ebony Tears, but this album has insta-fan potency so I now feel like I’ve been listening to them since their ’97 debut.

Ok, I’m going to make this easy on you; take the best elements from Pantera and the technical expertise of Meshuggah, you’ll be getting pretty close to what ET offers. The speeding riffs and monster muscle vocals are enough to shatter your teeth. But the intensity really stems from the powerhouse skin-beater, Richard Evensand, as well as bassist Peter Kahm.

Each move that the band makes is more than perfect calculation; it comes closer to the blistering insanity of genius. Each person in this band knows exactly what they’re doing and exactly what every other member is doing. Upon my second listen, much of the music is sounding like a fantastically thrashed out Tool.

There’s so much going on in this album that I get scatterbrained trying to come up with the right things to say about this bloody unreal band. Let me break it down a little so I have some structure rather than just freaking out on you and becoming completely incoherent...

The spine of the band, the percussion and bass, is really fast, but not so just for the sake of being fast. You can distinctly pick out exactly why each beat and each note is struck. To imagine the music without it as is, you would realize that suddenly the band wouldn’t be quite so tight and certainly wouldn’t provide such a crushingly huge sound.

Conny Jonsson’s six-string thrashing is far more than being competent, the riffing is wildly imaginative and diverse. Screw Nuge, this is the dude that can blow the balls off a charging rhino. He can take you from a ground-ripping speed riff right into a cleverly metalized rock riff with such deft skill you’ll be treated for whiplash before you can blink.

There are few vocalists that I will recognize as being utterly critical to the potency in a band. On that short list are names like Anselmo (Pantera), Keenan (Tool), and Fallon (Clutch). But, as you might’ve guessed, that list grew one name longer with Johnny Wranning. This guy is immense and all muscle with some of the brightest and smartest intensity I’ve heard in any metal band.

I’m going to stop here, because there’s just so much more to say you should go and get the album to discover it all for yourself.