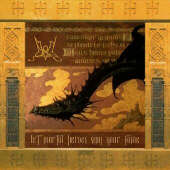 Summoning are a special case. On the one hand, they deserve praise for having found a very individual style by the second album at the latest. This is especially true in view of the fact that they gained a reputation in a scene with it, although their style has little to do with metal to begin with. On the other hand, it seems to me that Summoning have also become victims of their own to a certain extent over the years. The duo settled comfortably in their once innovative corner and from then on lived happily in their own conservative world.

Now it is the misfortune of every band that they either break up or have to launch a new release every now and then (unless, of course, your name is Kiss and you realise that you can't rake in millions with records any more anyway). So Silenius Protector asked, "Do we want to break up?" He said "no" and so Let Mortal Heroes Sing Your Fate was born. Okay, maybe it was Protector who asked the question and Silenius gave the answer. Let's not bother with details. What is more important is that the 2001 work ultimately offers more of the same. Dignified keyboard carpets are rolled out, the two artists murmur, bicker and sing along, the tempo is constantly in the lower rev range and the melodies still manage to create a great atmospheric density. Unfortunately, Summoning sometimes lose sight of the right measure. The closer has good substance, strong melodies and a certain drama, but it almost suffocates on its own pathos.

If, like me, you were washed into the realm of metallic sounds forever by the first thrash metal wave, you quickly realise that Summoning don't offer anything you actually like in music: dominating guitars, energy, speed, brutality and vitality - all that is missing. All the more astonishing that I still can't escape the highlight called 'In Hollow Halls Beneath The Fells'. The relatively dark basic melody, to which soft keyboard sounds are added in a perfectly arranged way, fascinates me and the percussive elements are also used fantastically. Whenever an uneasy aura of an uncertain fate arises, Summoning have their best moments. Even without having read old Tolkien, it becomes clear that this is music from another time and another world (if we didn't know better).

Although I don't dislike any of the songs, the aforementioned 'In Hollow Halls...' remains the only piece of outstanding quality from my point of view. However, nothing falls off the bottom either. On the clean, warm and, despite the melancholy of the music, somehow elegantly produced disc there are exclusively clearly structured, slightly repetitive but only very rarely superfluous sections. In the weaker moments, it sometimes seems to me like a last music-making before going to bed ('Ashen Cold'). Nevertheless, you can do little wrong with Let Mortal Heroes... if you like fatalistic romanticism and excessive melodies which are presented by competent musicians with an affinity for opulence and bombast.

I believe everyone who knows something of Summoning knows they play because and for their love of one J.R.R Tolkien and his rather famous fantasy novels. Namely "Lord of the Rings". I will try not to spew forth garbage about how well Summoning faithfully incorporates the works of Tolkien into their music, because I’m pretty sure we all know they invoke that great atmosphere.

I really enjoyed listening to “Stronghold”; Summoning’s last album. Lush, big keyboard symphonies combined with angry little man vocals created quite a unique atmosphere for this black metal band showcasing a rare talent for atmosphere and creativity. There wasn’t too much wrong with “Stronghold”.

Here stands Summoning’s latest testimony; “Let Mortal Heroes Sing Your Fame”. Another fine album, everything being taken into account. Flavours that were paramount in "Stronghold" are readily seen in “Let Mortal Heroes Sing Your Fame”, and built upon to a greater extent. Which brings me to my greatest gripe with this Summoning album; the ideas are built upon, not created. Whereas “Stronghold” used some fresh material and new ideas, the material on their latest epic seems tired and drawn out. Many of the Summoning tracks can equally be interchanged between “Stronghold” and “Let Mortal Heroes Sing Your Fame”, swapping one for another with careless abandon. In my opinion change is a good thing, and Summoning perhaps should have waited a time and released both albums as a double album stifling any criticism that creativity and innovation are not used well.

However, that being said, “Let Mortal Heroes Sing Your Fame” is a solid record and invokes superb atmosphere. Big battle drums, paganistic chants and the trademark keyboard signatures are here in the hundreds and thousands. In ‘The Mountain King’s Return’ there is a passage that sees an elderly man speak of war; perhaps Gandalf, or perhaps Saruman, who knows? What is known is this is a great song and truly drives home the Summoning atmosphere, which is one that is unbridled in this day and age.

Bottom Line: If you are looking for atmosphere, look no further, but if you were hoping Summoning has perhaps broken their shackles and tracked down some new ideas then you may want to look elsewhere. Recommended though.