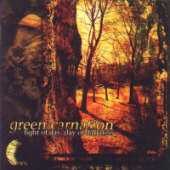 With any album that is of an abnormal length, there comes a worry that the album will not be able to keep the listener interested in the music for its full duration. The music may become dull and repetitive, boring, and possibly annoying. Of course, that is not the case with Green Carnation’s 60-minute opus, "Light of Day, Day of Darkness". Tchort and Co. has teamed up to create something beautiful and free of boundaries. They succeeded. Easily one of the best progressive pieces of Doom metal of this past decade, this album puts other lengthy songs to shame (sorry Edge of Sanity!) and gives other bands alike something to think about.

There are so many things in this album that I could list as great moments. Whether is be the chilling guitar, the progressiveness, the exceptionally fitting vocals, the solo’s, the epic feel, the catchy guitar riffs, or the emotion, it is a great album. Is there anything on this album that doesn’t belong here? No, but for some people the clean female vocals/saxophone might be a bit too much. Personally, I find it fitting and comforting. The lyrics are great too. The album flows through from beginning to end with seamless transitions, passages, and movements. The band makes use of their important ability to create music that builds up and has climaxes, and continues this throughout. Using acoustic & electric guitars, bass, drums, sitar, synth, saxophone, female vocals, choirs, and many other things has helped to create something truly amazing.

Green Carnation has taken the lead over all bands that are trying to do anything progressive and epic with a doomy feel. Tchort has proven that he has just as much of a creative mind as Ihsahn (Emperor) does. "Light of Day, Day of Darkness" is sure to stand the test of time and be remembered as an album that destroyed all challengers.

Bottom Line: If you’ve been looking for something that will impress you lately, and much has failed, this progressive doom opus should do the trick.

Most of you have heard In The Woods, but before “Strange in Stereo”, “Omnio” and few other releases, Green Carnation was where it all started. After Tchort joined Emperor and Richart Olsen left the band; our Norwegians found a new vocalist, changed their name and style and became what we have known as In The Woods. But that was a long time ago and no one would really care anymore except that Tchort, Anders Kobro (In The Woods, drums) and company are back as the reformed Green Carnation with a one-track, sixty-minute masterpiece “Light of Day, Day of Darkness”.

I don’t think that I can truthfully describe the music presented on this release. For one thing there’s really nothing that I can really compare it to. If I had to give it a tag the closest thing would be doom-goth, but that’s just a shallow way of describing this emotional CD. Musically you’ll find everything from Therion-like choirs, Katatonia’s atmosphere, Amorphis’ Hammond organs, and even Pink Floyd arrangements.

But “Light of Day, Day of Darkness” it’s not only about music, it’s about emotions. It’s about presenting life through notes. This is a musical legacy of a man who dedicates this epic to his son, Damien. A Man who, by way of journal notes, takes him on a journey through life guarding him from pain and sorrow based on his own experiences. It’s so real that I won’t be surprised if those recorded smiles and voices of a little child are actually his son’s.

To the music world, a concept that is built with many tracks creating one epic song is not anything new, but “Light of Day, Day of Darkness” marks the first time that it actually works and leaves the listener with the feeling that the whole 60 minutes were written during one unbroken time span and will keep you on your toes from the beginning to end.

Bottom Line: Nothing short of a masterpiece. It’s already the third day that this CD hasn’t left my player... and counting.