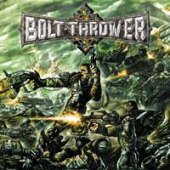 At the beginning of the 21st century, Bolt Thrower, the epitome of loyalty, integrity and heaviness, called to arms again. Without looking for new friends and without seeing a ray of hope at the end of the tunnel for the heroes of their lyrics, they had written nine new battle hymns that accompanied their "7th Offensive" - and the eponymous song stands in the center of the arrangement of the tracks.

Honour - Valour - Pride offers the gnawing guitars that probably all of us like to hear when it comes to the sonic attacks of the British combat unit. They roll out the red carpet for the somehow ominous, every now and then almost fragile melodies, before the brute voice of Karl Willetts destroys any form of fragility. Bolt Thrower's general, very stoical yet overwhelmingly heavy approach builds the fundament for the songs and spreads fantastic vibes, fatal and simultaneously compelling. The construction of tracks like "7th Offensive" embraces the listener violently. Like being fixed in a bench vice, one cannot escape the power of these salvos. Already the opener makes clear that the nearly monotonous but very effective guitars create an atmosphere of inscrutable and omnipresent brutality. The repetition of the main riffs reinforces the impression that there is no chance to flee from a war that has been unleashed by leaders who are not interested in making prisoners. Despite or exactly because of the fact that velocity does not play a big role, Bolt Thrower's archaic and resilient music reveals its full potential and leaves a trace of devastation.

Tracks like "Inside the Wire" or "Pride" do not only score with irresistible massiveness. In addition, they present a groovy element without being modern in any way. Bolt Thrower execute their ideas excellently and this is no surprise with regard to the experience of the formation. And we may not forget that they see no sense in changing their style. Immune against any form of fickleness, they do their own thing in a merciless manner. I am pretty sure that the songs have been grinding millstones in their former lives. In a nutshell, the musicians are spitting on modifications of all kind. Thus, they deliver another portion of their almost hypnotic compositions which doubtlessly have their own charm. Moreover, they lend the quintet from the United Kingdom a unique selling point.

I have already referred to the experience of the protagonists and therefore it is only logical that the album has exactly the sound the band wanted. The guitars prevail, but not at the expense of the contribution of the bass, drums or vocals. The dark touch of the mix goes hand in hand with the desperate harmonies and in its most unpromising moments, the mental emptiness of the combatants becomes tangible. Too bad that another childish artwork disgraces the album - a more realistic war scenario would have been much better. Not in order to glorify its horrors, but to be aligned with the musical content which has definitely no comic elements.

The album has no highlights - the entire full-length is a highlight. So, it makes no sense to pick out individual pieces, especially when considering that Bolt Thrower's compositions always form a consistent appearance of the entire output. This fact lends the songs a further dimension, because the whole is more than the sum of its parts. Albums of this band, maybe with the exception of the slightly crude debut, have their own character, their own aura and their own vibes. This separates the band from thousands of its competitors. And this speaks volumes - at the beginning of the 21 century, but also now and in the future.

A few seconds of a warning alert, the sound of flying bombers, the shrill noise of dropped bombs and the thunder of explosions: you have one minute to get the hell out of here. Too late, the signature monstrous guitar riffs of Baz Thomson and Gavin Ward, destructive rhythm section and new vocalist Dave Ingram’s (ex-Benediction) powerful growls are already rolling over your house, leaving ashes and the smell of burnt corpses.

There are bands who change their style with almost every album and there are bands like Benediction or Bolt Thrower that stick to their roots and with each release give us exactly what we want and expect. Saying that, if you’re looking for music experiments you can skip this review right now because there are none on this album and thank god. I just can’t see my favorite war-machine, Bolt Thrower, with violins or keyboards on board or at least not under that name.

I simply don’t have any other words other than ‘riff masters’ to illustrate an unparalleled work of guitar wielding by Baz and Gavin. Each song is filled with memorable structures; tracks like ‘Inside the Wire’ or ‘K-Machine’ will throw you out from your comfy chair or couch and force you to bend your knees and flash the horns whether you want to or not. “Honour Value Pride” is a 45 min. non-stop headbanger to a slow moving bulldozer that is destroying everything in its path and this is exactly how mid-paced death metal was meant to be played.

What holds this disk from being a 10 point masterpiece are few moments on tracks like ‘Honour’, ‘Suspect Hostile’ or ‘A Hollow Truce’ that feel like our machine runs low on gas and doesn’t have enough power to move forward, just a bit too slow for my taste. But those are just minor flaws that dwindle with the rest of this outstanding material that was fantastically produced by Andy Faulkner who did a remarkable job on making sure that each guitar stroke would leave a lasting impression.

Bottom Line: “Honour Value Pride” is one more battle won by Bolt Thrower. The lack of this CD in your collection will look like a hole of the size of the crater after the explosion of a 10-megaton bomb.