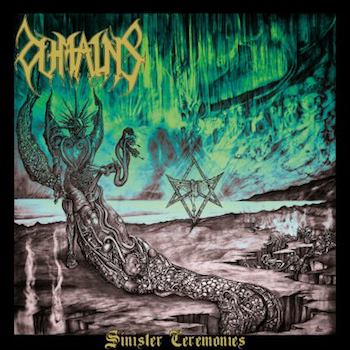 Domains – "Sinister Ceremonies" is the first release of the Finnish label/zine The Sinister Flame and at the same time it is the first official creation of the three Spaniards. You have got to admit that it is a solid debut. From the first bars you can hear and feel what it is that we have to deal with. A dark, underground death metal, reeking of the devil for miles. Every sound that those three Spaniards create is like a kick; a kick to destroy all the doctrines of Christianity. My subjective ear reminds me of early Immolation releases, although European-styled and with a heavy dose of tarry icing on it. I recommend this release to death and black metal maniacs alike. I don't know whether the final sound result was intended, or if it was purely coincidental, but knowing that we are dealing with a double debut, this is such a dose of bashing that Lucifer himself would not be ashamed of it. There are certain flaws in production, but such is the difference between European and U.S. releases. Skillfully applied reverbs, guitar and bass solos, and other small flavors are almost like bacon and onion bits on potato dumplings, but that reference will be understood only by few. ;-) I rated this album with a small (-) for production and a huge (+) for authenticity and climate.