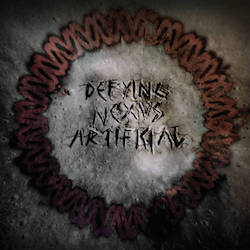 Defying was born in 2008 in Olsztyn, Poland, and after few typical for a new band lineup changes and couple of demos, 2014 brings a full length debut "Nexus Artificial". What a night of heavy drinking that must have been to wake up and say - for our first record let's make progressive concept album about human existence. Jokes aside, cause with expectations set that high Defying came out on top and positioned themselves for a very bright future ahead.

Let's clarify that our talented quartet's version of progressive metal is not in vain of Dream Theater and such, but rather very mysterious and nostalgic, almost to the point of doom. Very spacious and lush compositions are absorbed best with a serving of moonless night sprinkled with couple flickers of a candle. From opening ambient intro, Dēmiourgós, and first clean guitar notes of Newborn Sun, Defying takes us on the journey through the 'nexus' of our existance. Each track on its own and as a whole works seamlessly and presents very high level of musical proficiency and esthetics usually reserved for later outputs in band's career. Like veterans of the scene, Defying spreads its message throughout all forms of music medium. There's full spectrum of vocal hues from spoken words to deep growls and even couple female ones on 'Prayers' and 'Mismatch'. Broad range of guitar effects, samples and acoustic guitars overlaying the progressive dynamics of rhythm section keep almost an hour of music always compelling and captivating. With all those elements and characteristics Defying created very lustrous debut from which they will be judged against in the future.

There's not much more to say but to conclude that our progressive dreamers presented themselves to the world with a very fulfilling debut that leaves no doubt to the very promising road ahead, but in the meantime - dive into exceptionally good "Nexus Artificial".