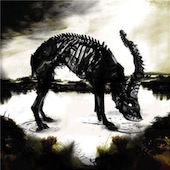 It's hard to believe that such an important album, at least to me, has not seen a single review on here. This will be a pleasure, an honor, and extremely difficult to articulate.

I can't remember how I discovered this band, as it's not easy for me to discover new music. I'm one of those people who don't use Spotify, because the "related artists" section is too distracting for me. When I listen to an album, I like to absorb it, and spend a ridiculous amount of time with it, so I'm not really known for branching out too much. What made Amenra different? The fact that they are signed to Neurot Recordings, home to Neurosis, had a lot to do with it. Neurosis are one of my favorite bands. I love every single note that band has recorded over their career. So, if they are signing a virtually unknown, abstract band from Belgium, then they must know something. I trust their judgement.

Amenra is hard to describe. To me anyway, it's more of an experience than music. It transcends music and revokes all sorts of thoughts and emotions. It's definitely not easy to listen to. I don't think anyone just casually listens to this band because they have great tunes. That's not to say that they don't have parts that you can remember, as they surely do, it's just that their albums are meant to be listened to as... albums. Not individual tracks.

The sonic landscape this band paints are terrifying, unnerving, emotional and bleak. It's all comes together, crashing down on you, like the weight of a thousand moons. The guitars often roar relentlessly, the vocals are tortured and full of all those years of sadness and hatred you've built up inside of you. On the flip side of the coin, the guitars can be slow and beautiful, making you hang onto each note, and the vocals can be silky and soothing, such as the female vocals in "Am Kreuz"

One of the highlights of the album is the diversity of the soundscapes displayed throughout the songs. No two songs are quite alike. They are only similar in sound, never in texture. The arrangements are incredibly well thought out. If the placement of the middle section in "The Pain... it is Shapeless" doesn't give you chills, then I'm not quite sure what will.

The production and mix on the album are exactly the way it needs to be, supporting the music and themes. No one instrument over powers another instrument; however the vocals seem to be a bit quieter in the overall mix. I believe this was done on purpose, as something like this surely could not have gone overlooked in an album with so much detail. And that's another beautiful thing about this album - the layers of details. This is one of those albums that should be listened to on headphones, though a good set of speakers will also do. I find that personally, it's a lot more absorbing and rewarding when listened to on headphones.

If you're a fan of music which inspires you to think and to take you places, then it's essential that you obtain this.