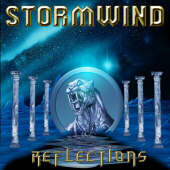 Starting off with some killer Arabic sounding chanting, then proceeding to some big drum blasts followed by some sweet guitar work ‘Genesis’ gets the ball rolling well for Stormwind’s latest effort in big old power metal tunes. “Reflections” is the name of the new album and if judged by the opening instrumental piece, it could be very good.

Stormwind’s style of power metal is the ‘epic Hollywood’ style in the vein of Rhapsody, and incorporates most of the features that make Rhapsody so famous; big epic choirs, overblown guitar and keyboard solos and pompous vocals (don’t get me wrong, these are good things). Overall “Reflections” ain’t a half bad effort at some ‘epic Hollywood’ metal, if that is what it is supposed to be. Which brings me to my biggest problem with Stormwind, they seem to be just doing enough to make ends meet with “Reflections” without deviating to far from the norms of the ‘epic’ power metal.

However, there is a lot to like about Stormwind, while they may be in the same vein of Rhapsody, they do not push the boundary to the extent that Rhapsody does, which essentially means Stormwind loses that pompousness that Rhapsody walk a fine line with. This is a good thing.

I do not mean to write off Stormwind as a poor man’s Rhapsody, but my experiences with power metal are more limited than they are with black metal, so drawing comparisons may seem a bit muddled to you the reader. Stormwind do feature enough of their own attributes to warrant a listen and you might see it in your favour to perhaps dig up “Reflections” and give it a whirl in the old CD player.

Bottom Line: While not blowing my mind, “Reflections” is a nice power metal album, with ample dosages of all good power ingredients. Better than reasonable album.