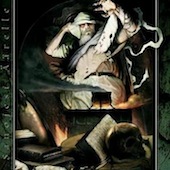 We are living in times of fake news, that’s clear for all to see. But did you already know that we are also witnessing the era of fake Finns? I’m sure they exist and give themselves shitty names like Nightwish, Lordi or Sonata Arctica. That’s disgusting and a shame, because everybody knows that only black metal is true Finnish music and it sounds like hell. While we are at it, Horna means hell and so the cycle closes. Sanojesi Äärelle, their release from the year 2009, is a double kick in the teeth. A playtime of almost 85 minutes asks for true black metal heroes to review the album. I don’t belong to this species while being just an ordinary metalhead.

Nevertheless, I took the challenge.

Disc 1 is the main part of the album with ten pieces and a length of 47 minutes. No intro, no gimmicks, no interludes: Horna are at war and they see no sense in pausing for breath. This does not mean that each and every single song reaches the ultimate degrees of brutality, harshness and grimness. The strong 'Katseet' as well as the outstanding title track, to name but two examples, rely on a mix of extremely rapid and almost surprisingly relaxed parts. But inter alia due to the bestial vocals of Corvus, there is an inner cruelty in each and every song, in each and every line, in each and every tone. Horna’s galaxy accepts no ray of light, that’s for sure. And it goes without saying that the protagonists also do not shy away from uttermost wickedness. Fierce eruptions of velocity break through the powerfully produced wall of sound and show impressively that the throne of 21st Century black metal stands in Finland. By the way, powerfully produced does not mean that the dudes overestimate their external impact. Despite or exactly because of its enormous pressure and density, the mix of Sanojesi Äärelle is deeply rooted in the black underground. An equally great band like Aegrus prefers a less nerve-shattering sound, but Horna love to explore the extremes in every direction.

Besides the aforementioned features, the songs of disc 1 score with homogeneity. Even the cover song ('Wikinger') joins the ranks seamlessly. Therefore, the ten songs form a misanthropic manifest from the beginning to the end. Perhaps some genre fans with an affinity for melancholy will moan that the atmospheric side of black metal comes off badly and maybe they are right to a certain extent. However, the sheer fanaticism of Horna makes up for this. Not to mention their song-writing skills that result in more than a handful of exciting highlights. The opener 'Muinaisten Alttarilta' drags the listener directly into the blazing pits of Satan’s home, 'Verilehto' has a weight of ten thousand tons and honestly speaking, I could continue the list nearly until the end of the album, although the tracks on position nine and ten cannot fully keep the quality of infernal pieces such as 'Orjaroihu'.

Disc 2 continues the nightmarish scenario. Style and production are more or less well aligned with the ten previous tracks. Maybe one can say the quartet of the second disc has a gloomier touch. Vehemence is still relevant, but mid-paced parts also play a significant role. The shorter tracks of disc 1 have a bigger effect, but songs like 'Ruumisalttari' are also anything else but oven fodder (greetings to the forum community), even though the main riff of the overlong third track of Disc 2 is relatively trite. Anyway, all in all I admit: it is a challenge for both artists and listeners to create or to listen to 85 minutes of that sort of music. Yet it is worth doing it and if I had to evaluate only disc 1, I would think about a 90% rating. In view of this Horna can be proud of this authentic and mostly fantastic double album. Nightwish, Lordi or Sonata Arctica will never release something that even comes near to the class of Sanojesi Äärelle. If I only knew the true origin of these impostors.