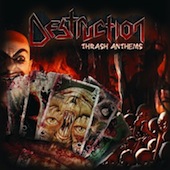 A best of compilation was a good idea for the band; it featured their older songs to their newer ways of playing them. During the 1990s, Destruction was totally and completely absent from the thrash metal scene. Then in 2000, their spirit held together and resurrected itself. So, they surprisingly decided to rejoin as a band and put out some new material. This filled loyal fans with immense satisfaction. The lineup on here consists of their two original members; they are, Marcel "Schmier" Schirmer and Mike Sifringer. Marc Reign joined the band in 2002 and has been playing for them ever since. Frontman Schmier is on vocals/bass guitar, Mike is on rhythm/lead guitar and Marc is behind the set on drums/backing vocals. There was no indication on the CD insert saying if there were any additional guest guitarists or other backup vocalists. However, on some tracks it sounds as if former Destruction guitarist Harry Heinrich Wilkens played on a few solos. This is merely speculation though; I say this because his leads have always been more technical than Mikes.

As mentioned previously, the band put together more modern versions to their older classic tracks. The music brings back many fond memories to their older releases. However, there were two modern songs featured on here. The newer tracks were "Profanity" and "Depostition (Your Heads Will Roll)"; this gave the listener a sense of their newer writing style. The rhythm guitar riffs for "Release From Agony" and "Mad Butcher" were examples of a few different ways that they now execute the originals. The riffs were played in a different tuning then before; there were also a few fills that Mike creatively meshed together to make the songs sound more fluent. All of the older songs still brought forth with them the same level of ingenuity for longtime fans to hear. So, the band achieved their goal of keeping listeners interested. The fierce guitar executions composed by Mike are, in my view stronger than the originals. All fifteen tracks displayed on here showed that Destruction hasn’t lost their talent as a band. There really aren't any songs to dislike; that would include the two newer songs as well. The music here contains guitar rhythms that were already innovative for their time during the earlier days.

Mike played the older songs with precision; there was no doubt of his talent in handling rhythm guitar duties. With his efforts, Destruction remains to be an original sounding thrash metal band. His ideas are one of the reasons why the band remains to be a legendary thrash metal trio. Other songs such as "Invincible Force", "Total Desaster", and "Reject Emotions" are definitely stunning compositions. The song structures contain with them guitar work that exhibits an intricate use of bar chords, clean tone melodies, aggressive tempos and technical rhythmic overtures. Their ideas in terms of songwriting remains to be completely unique; that's probably why they decided to rejoin as a band. Undying fans will appreciate this compilation. Once again, the newer recording of their older songs created justice for the originals.

This best of compilation gave the band a sense of fairness than it did on earlier recordings; this is because of the more modern use of technology. However, the overall tone to each song gave off a flatter kind of sound to it. The mixing didn't really factor in Schmier's bass guitar too well; it seemed to be absent totally among the rest of the instruments. One other critical point to convey is Mike's lead guitar playing; he is a creative rhythm guitarist, but not a well-rounded lead guitarist. His leads merely sound improvised and played without any sort of ingenious respects. That's why the assumption that ex-guitarist Harry Heinrich Wilkens contributed to some leads on this compilation; Mike would in no way be able to handle sweep picking or arpeggios.

In terms of the vocals, they haven't really changed over the years. Schmier still sounds totally unique as he did in the past, especially during the Destruction of the 1980s era. He doesn't copy anyone else's vocal styles, nor has he ever done that. The voice suits the music like it always has. The band really tackles the vintage and aggressive songs with utmost precision. The lyrics in their earlier days talked exclusively about Satanism. Songs such as "Bestial Invasion", "Death Trap" and "Total Desaster" reflect this lyrical stance. Later songs revealed a different blend of topics; they seemed to navigate towards covering issues that pertain to mental illness and violence. A few of these songs would include "Reject Emotions", "Cracked Brain", "Life Without Sense" and "Mad Butcher."

In retrospect, this compilation does a lot for the band and keeps loyal fans impressed with the Destruction of both the past as well as the more modern day. Their choice of song selections throughout this re-recording keeps listeners very interested, especially in newer versions of these songs. The overall sound quality could've been better produced/mixed; it is one of the few critical points that I have towards this recording. Schmier could've done a better job with his songwriting efforts; he seems to sing about nonsensical issues. However, the music meshes well with the vocals. A final critical point was that the lead guitar work by Mike could've been better played out. The rhythm guitar work, however was better here than on the originals. Their newer member, Marc puts forth a vigorous effort behind the drum set. He also does a good job in fulfilling backing vocals to help out Schmier. Other than that, fifteen tracks and over seventy minutes of great thrash metal was again a smart move by the band. If originality in thrash metal is to your liking, then this compilation will best suit your interest.