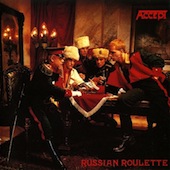 Do not ask me why, but I have a crude hobby. I like to write critical reviews for Accept albums. Even after 30 plus years, it makes me angry that this once promising horde derailed completely. Russian Roulette starts relatively lively and fast with "TV War", but I guess they just wanted to showcase the commercial version of "Fast as a Shark". You say this description sounds ambivalent? Indeed. But Accept had lost any form of currishness with the release of Metal Heart and therefore I was more or less happy about the here presented opener. But don't try to find many edges and corners on this album. Initially, its name was "War Games", but Grave Digger were quicker. And this was good, because the material of Accept did not embody any kind of war. However, this fact explains why the third track is called "Russian Roulette", although the chorus mainly consists of "War Games" shouts of the background choir. By the way, I admit that I like this song. The catchiness of the chorus is not at the expense of the metallic foundation and this pleasant combination deserves respect. The same applies for the exciting song pattern which builds up tension in a clever manner.

Nevertheless, all in all broad sections of the album sound polished and oily. Dirkschneider is a good squaller, but his attempts to sing in the proper meaning of the word fail. He sounds like he feels not well in his skin (and indeed, his days were numbered). Maybe this is the reason why the background vocals shape many parts of the songs. Maybe less would have been more. If I want to listen to melodic yet powerful choirs, I dive into Kiss' "Lick it up" (but this is probably just my iota of personal eccentricity, so don't take it too seriously). And if I want to enjoy the original version of the verses of "Heaven Is Hell", I listen to the fantastic title track of Balls to the Wall. Accept border on self-plagiarism while offering this pretty solid, but overlong and unspectacular number.

While the majority of the songs pass by without making me angry, happy or anything else, I realize that the production fits the musical approach: it also gives me nothing. No major flaws, a lukewarm quantum of heaviness and clean contours, that's it. I don't want to blame the mix for being sterile or soulless, but it mirrors the commercial intentions of the once mega-robust, now fickle German team. Thus, I am not willing to praise the sound, even though I admit that it cannot be compared with the soft waves of Priest's "Turbo" and similar cruelties from the plush factories. Either way, if Metal Heart is too soft and Restless & Wild too hard for you, Russian Roulette could be your new sonic paradise, but I have massive doubts. The great number of predictable run-of-the-mill tracks or a complete flop like "Walking in the Shadow" (ridiculous background vocals, embarrassing chorus) make it hard to fall in love with the material. Exceptions like "Aiming High" with its pretty rebellious guitars confirm the rule, but don't expect any kind of climax during the second half as long as you don't press your own copy of the album with bonus tracks from Breaker, Restless and Wild or Balls to the Wall.