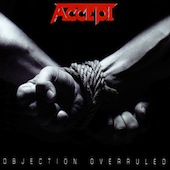 Type: Full-Length
Release Date: February 1st, 1993
Label: CMC International Records
Genre: Heavy
1 Objection Overruled
2 I Don't Wanna Be Like You
3 Protectors Of Terror
4 Slaves To Metal
5 All Or Nothing
6 Bulletproof
7 Amamos La Vida
8 Sick, Dirty And Mean
9 Donation
10 Just By My Own
11 This One's For You
MetalBite on YouTube

How much pain can you take when it comes to a seemingly endless row of shitty albums of a band you once worshipped? In view of the outstanding Balls to the Wall, I was eagerly awaiting its successor and I still remember the situation when I heard the title track of Metal Heart for the first time. Well, a kitschy song name, but the verses and the chorus were more or less solid. And then came the cuddly solo… in all honesty, what can we expect from a “metal” band with a classic-loving dictator as head of state? And neither Russian Roulette nor the ridiculous Eat the Heat were able to relieve the pain. Dirkschneider left the band and shortly after the dictator found himself sitting in the center of sonic excrements. No way out but begging the commercially non-compatible singer to come back. Dirkschneider returned and so did I (even though I must admit that the classic-lover had not asked me to find my way back to his unit).

Of course, Objection Overruled, the soundtrack for my reconciliation with Accept, could not score with tracks like “Starlight”, “China Lady” or “Turn Me On” – not to mention the real classics. The release from 1993 is full of banalities. Generic riffs, a semi-ballad with a Spanish name, trivial choruses, designed for people with the brain of an amoeba – you will find all these precious items on this album. Tracks like the incredibly dangerous (little joke) “Protectors of Terror” celebrate a feast of grueling simplicity. “All or Nothing” has decent verses – too bad that its happy metal chorus also makes me scream for an iota of aspiration; but the dictator says no. This makes me slightly angry, and the same applies for those dudes who say that Accept returned to their classic style with this album. Come on, boys, what went wrong in your musical socialization? Compared with the rage of Breaker, the sharpness of Restless and Wild and the malignancy of Balls to the Wall, the here presented album is a toothless tiger. Nevertheless…

…I cannot say that the output sucks. Sometimes my banal mind loves banal things and then it is going to tell me that this kind of banality is a good thing. “Slaves to Metal” is not less primitive than “Protectors…”, but I like it. Its catchiness has something that makes me smile and the almost “Princess of the Dawn” compatible aura brings back pleasant memories. “Bulletproof” with its Wild West flair has a casual flow and “Sick, Dirty and Mean” showcases a robust heaviness. Once again, the album has not much in common with their energetic early works. Okay, the opener and the closer work as an alibi in terms of uncommercial sounds, but the nine tracks between them do not shine with a great amount of edges and corners. Yet it is also true that Objection Overruled is on a par with the classic albums with regard to, well, Germanness (does this word exist at all?). Prototypical Deutschland Steel has never sounded much purer than on Objection Overruled. Even the slightly dreamy instrumental, the tribute of the dictator to himself, is less gruesome than I thought.

Production-wise, the band did not waste the probably large budget. Objection Overruled sounds direct, muscular and almost honest. (I say almost honest, because the trauma of Eat the Heat still haunts me.) Dirkschneider is in good form and so he offers the three tones he is able to manage with great ease. Sometimes his “I can piss with the big dogs” voice lies in close proximity to that of a shriveled witch with a wart on her nose, but that’s only logical, because his optical appearance is also not too far away from such an old hag. By the way, the guitar dictator still had hairs… or he loved to wear an expensive wig, who knows. That’s what real “Slaves to Metal” do – and the pain I mentioned at the beginning of the review cannot completely be taken away by a couple of good songs. Nevertheless, it just feels good that this album was a shift away from previous puerilities. You do not agree? Objection overruled!