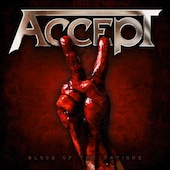 Fourteen Years. It’s been a long decade-plus waiting for German legends Accept to find the blueprint for another album, but here we are with Blood of the Nations blasting my ears like a freakin’ truck load of drums teeming with C-4. The traditional style has not only been making a comeback, but one of the forerunners of the scene is back to lead the charge!

From the very first note of “Beat the Bastards” the oh-so-familiar guitar tone fills your head and makes you smile that the guys have managed to persevere with new vocalist and former TT Quick bellower Mark Tornillo replacing Udo Dirkschneider, and very aptly I add. With some obvious similarities to the aforementioned departed, Tornillo manages to make this band his home, issuing what can only be called a powerful performance that incorporates a Brian Johnson feel to his style. With the recent rash of bands calling upon the old school traditional style, what better band to lead the lighted way than the mighty Accept?

All through Blood of the Nations the quality and tenacity of Accept shines through the music. Not since Russian Roulette back in 1986 has Accept really bashed in my head like this album does; after the disappointing Predator in ‘96 it might have seemed an easy deal to just discard Accept as a ‘blast-from-the-past’ whose “Balls to the Wall” or “Fast as a Shark” will be the last reminders of some former greatness. That is not the case at all, my friends. Wolf Hoffmann and Herman Frank provide the stellar guitar shred we’re so accustomed to, with even more modern flavor than expected.

“Shades of Death” is a tune heavily drenched in bleakness that is about as evil as Accept gets, with its grueling dark tones, while “Blood of the Nations” is possibly the new anthem for the metal armies around the world. “Kill the Pain”, however, is a slow, reflection piece that illicit some serious introspection within its beauty. From beginning to end this album is just a top-notch effort that might well be one of the better releases of two-thousand-ten’s second half. You honestly can’t help but be amazed at how good Accept still is maintaining its original sound without sounding dated or pigeon-holed; I know I was one that didn’t expect too much, but as you all know I love to be proven wrong. “Locked and Loaded” will make you a believer with its speed metal assault that is second-to-none, it’s just that good.

I’m sure many people dismissed any Accept revitalization with the same wanton fervor as us ever getting a clear answer to the Jimmy Hoffa mystery, but the band that won’t quit regrouped, assembled some amazingly strong songs with an equally resonating singer and pretty much left any doubted waving in the effortless winds of the eternal headbanger’s hair. The standouts for me are “Beat the Bastards”, “Shades of Death”, “Locked and Loaded” and “Kill the Pain”, but I can’t find a weak track within these digital transfers, and that’s saying something for a band that was all but done a decade ago, save for the occasional live album and label cash-grab compilation. I’ve a feeling you’re going to be hearing Accept’s mighty name bandied about quite a bit more these days, and deservedly so - they not only bounce back, they leave some pretty substantial marks on your forehead!