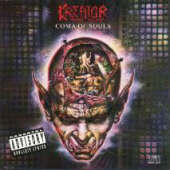 Kreator doesn't really need a lengthy introduction because they've been in existence in the thrash metal community since 1984. Their lineup on this release features Mille Petrozza on guitar/vocals, Frank Blackfire on guitars, Roberto Fioretti on bass, and Ventor on drums. Every musician on this release contributed nothing but good on here. This is the type of thrash metal album you can analyze and listen to in pure amazement. I think that this release was the best one in the whole genre during the year 1990. Metallica was making a change in their style of music after "...And Justice For All" so Kreator put forth their unbelievably excellent contribution to the metal community with this release of theirs.

The guitars feature a lot of different rhythms composing tremolo picked frenzies, bar chords galore, palm muted open notes, plus leads that were amazingly fast and technical. The music is memorable, every single song on here deserves a whole ton of praise because of it's innovation and creativity. They really made this album with a fresh start in songwriting that is entirely invigorating. Tempos of the songs change rapidly, but that doesn't replace the awesome and amazing capabilities that they were able to amass on this release. About 44 minutes of mind boggling thrash metal to the core. I don't think any of Kreator albums surpass this one.

I enjoyed all of the songs because every one of them feature thrash metal genre perfection. I'd have to say that "When the Sun Burns Red", "Coma of Souls" and "People of the Lie" are the best tracks. But all of them are worth checking out if you don't own this album. The leads were the best performed by Frank, Mille's were a tad sloppy and I think that he's better equipped on rhythm guitar not lead. To me, it sounds like he's a self-taught musician. His vocals are innovative and memorable. No one vocalist can emulate his voice, it's totally original and sticks with you. That's what sets apart Kreator from the rest of the thrash metal bands. His vocals are among the best in this genre.

The production/mixing was done with precision. Every instrument was mixed in with perfection. No instrument was left out. The guitars were filled with plenty of distortion, the bass was audible to the core, vocals didn't drown out the music, and the drums were well heard. The lyrical content features them talking about death, religion, politics and war. There were no Satanic or mindlessness in the words they all had to deal with real life issues. So on that front it was good. It would've been great if Frank Blackfire was still with the band though because he sure could shred on the guitar. Their replacement doesn't come close to his talent, but he's out of the band and has been out for years now.

Kreator put forth something astounding here. Not to say that they aren't a good thrash metal band anymore, but the rhythms in the music are their best ever created. This is not only my point of view, I'm looking at other people's opinions on this release and they came up with the same answer: perfection. Their previous releases to this one don't even come close to achieving more success in the songwriting capabilities of the band. They must've really wanted to come out with something totally amazing and "Coma of Souls" is what they came up with. If you're a fan of thrash metal and you don't own this album, buy it now if you haven't already!

While Slayer and Judas Priest may have been regarded as the kings of thrash metal in 1990, it was bands like Kreator who were really pushing the darkness and glory of this style to its true potential. Ruthlessly fast and mean guitars execute one killer song after another the forge this mighty follow-up to 1988’s "Terrible Certainty". Damn, I’m impressed!

With solos aplenty, semi-clean vocals and blast-beats as well as slower tempos, Kreator’s style is like an equilibrium of traditional metal and extreme; the first step for metalheads seeking to explore the dark realms of black or death metal. Kreator are just as potent but more outwardly accessible. With amazing songs like 'Material World Paranoia', 'Hidden Dictator', and 'Mental Slavery', Kreator prove that they were more bad-ass ten years ago than half the bands calling themselves "extreme" today!

The album keeps a very strong, solid front throughout. No weak tracks, no weak parts, just strong, ambitious consistency the whole way through. Whether is a groove-oriented headbanger like 'People of the Lie', or a violent thrash anthem 'Terror Zone', you’ll find no faults in Kreator’s musicianship, songwriting, and arrangements. The songs have a beat and are damn catchy, but at the same time brutal and fast, there is nothing bad to say about "Coma of Souls", I don’t know many bands today with this kind of talent. Brilliant!