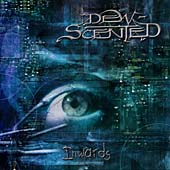 Don't ask me why, but I always ignored Dew-Scented, even though I knew that they make music that I like. I just did not have enough time. Roughly 1865 great bands, but only one Felix. This mismatch could not remain without consequences. So now it's time for active repentance. Inwards, the full-length from 2002, is a mind-blowing demonstration of permanent power, well-controlled brutality and violent euphoria. The music does not only illustrate the strength of the combination of thrash and death metal. It also makes clear that a seemingly one-dimensional approach does not exclude dynamic and liveliness. The Germans avoid monotony, and this alone separates them from many competitors who are seeking salvation in pure or somehow combined death metal.

Who should lend an ear to an album that was released 17 years ago, in particular in view of the fact that its creators are no longer active under the then used name? Well, first things first, Inwards has a timeless production. Producer Andy Classen, formerly known as the husband of Holy Moses' Sabina, has forged this wall of sound that overcomes any form of resistance. The album sounds voluminous, tight, aggressive, direct and dense. Honestly, this is exactly the sound this kind of music needs - and I forgot to mention that the vocals on the one hand and the instrumentation on the other hand are well-balanced. In terms of the musical content, this album leads Dismember and Slayer to the altar in order to marry and give birth to many ugly children that hail this kind of music. Dew-Scented are no typical Teutonic band, they sound very international without losing their identity. Due to the technical competences and the effectiveness of the riffs, the band is not at risk to fail in terms of individuality. The guys also understand to present their mostly very fast-paced songs with a homogeneous flow and so there are enough features that shape the specific characters of their music, even though the raw and slightly inflexible voice of the lead singer does not add a special note.

It's hardly possible to identify highlights. Imagine that ten cannons fire at ten houses, you see the ruins and then you are forced to say which house has the biggest damage. In other words, jagged and sharp-edged riffs show up constantly during the entire playtime, the drummer sees no sense in stopping his violent activities - blast beats not excluded - and the whole unit enjoys its remarkable compactness. Maybe this abruptly starting massacre is five minutes too long, but maybe it is rather true that I become too old for this kind of merciless murder. Both is possible - even at the same time. However, if I try to make a difference between the single cannon shots, it might be that "Bitter Conflict", the title track and "Terminal Mindstrip" stand out. Yet it also can be that tomorrow I prefer three different tracks, because there are absolutely no fillers. Anyway, one thing cannot be denied: Dew-Scented avoid melodies without any kind of negative consequences, because the riffs do the talking and they do it nearly always in a brilliant manner. Bottom line, young metalheads should look out for this and further albums of the band. Too bad that the guys, who always chose a title beginning with the letter I, never dedicated an album to me. "Ignoramus" would have been a suitable name.

Whether or not it was an obscure allusion to the writing of Edgar Allen Poe, I was a little tentative and perhaps suspicious of a band that would don a moniker that sounds like a new line of perfume by Lysol. But this album doesn’t deliver visions of pretty girls on piers or a fresh clean smell on your kitchen floor. This is total destruction.

Inwards is a powerhouse of an album, shredding the bloody hell out of everything in earshot. Floryan Muller’s riffing sets up an audio phalanx of rolling thrash energy that simply devours. Unfortunately, the guitars do falter a little when it comes to the solos and even then the problem is mostly the mixing. The occasional squeal comes through fine, but when it comes to laying down a second guitar track to add in a solo, that could use a little growth, the mixing promotes it so much that it all feels unnatural. But this doesn’t occur too often and is heavily overshadowed by the speed-riffing onslaught.

The vocals of Leffe Jensen are rooted in both the world of thrash-metal and that of death. Overall it is a very intense performance and not one track seems to out do another in this area. Whether that’s a good thing depends strongly on the listener’s need (or lack thereof) for eclecticism in metal performances.

The rhythm section is strong and fancy-free, which leaves a little to be desired, but is nonetheless a fierce and potent engine behind this weapon of devastation.

I feel that the worst enemy of this album is the production, primarily the sound mixing. Dew-Scented has the strength and potential to be the biggest and baddest of the thrash arena and they deserve a talented and meticulous production.

Bottom Line: It would be healthy for Slayer to start getting paranoid about the smell of grass in the morning.