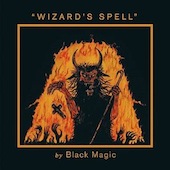 We are well into the second decade of the 21st century, and I feel thrash metal in its pure and classic sense has lost most of its appeal. Sure, I still go back to listen to those lauded discs from the '80s and early '90s, and I get the occasional bit of dumb fun from the likes of Havok and Merciless Death, but what is new? I'm more interested in hearing thrash used as a base for some kind of alloy. Thrash can mix well with things such as black metal, death metal, doom metal, prog, powerviolence, or even traditional metal from the pre-thrash era. It's largely in this last category that we find Black Magic, whose name appropriately references a song from Slayer’s debut.

Their debut album "Wizard's Spell" represents the sort of low budget, low concept basement fun that only requires enough dexterity and thoughtfulness to properly play a riff by Iron Maiden or Mercyful Fate. Fortunately, these Norsemen perfectly capture what I can only assume was a weekend of drunken revelry. Theirs is the sort of music that requires either the naïveté of a teenager or the mentality of one.

If Metal Archives is to be believed, this album was made by two young men who were barely born in the '80s, and thus cannot possibly remember even trace elements of its culture or politics. The recording is thus an exercise in nostalgia by osmosis. Influences were acquired via recommendations of cool older brothers, unwitting mentors, or uncles and aunts that the rest of the family regarded with silent grimaces and scowls of contempt. Good on them!

Venom, Slayer, Mercyful Fate, Iron Maiden, Hellhammer & Celtic Frost… all of this and more has been carefully considered for both songwriting templates and production choices. The initial inspiration may have been sloppy and easy fun, but the final product resulted from a good degree of consideration. Reverb was applied here, and an extra hammer pull-off there, but only just before the tempo change. Each song evokes some aspect of 1980s heavy metal and/or thrash, making this a tidy little project. Black Magic is probably not a band with a long shelf life, at least in its current format. They may yet hold surprises, but as things stand this is like a weekend trip from Boston to Maine: short, sweet, and only to be repeated on special occasions.