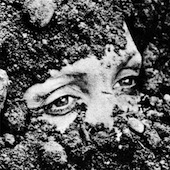 Released from Love is an odd duck. Typically when you see two band names attached to one EP, you can count on it being a split seven inch. The bands will divide the running time up by sides, and each artist is allotted or two songs. Instead, what we get here is a set of four songs where Thou are augmented by contributions from The Body. That means we get a five man band, plus two orbiting and optional members, creating an arsenic mud pie with a tar ball frosting. Yummy.

This is definitely Thou's show, and I'd argue that works to the recording's advantage. In my admittedly limited experience, I find them to be the more compelling of the two bands. The Body certainly have some interesting and original ideas, but they don't seem to mesh into full songs or compositions. Thou have been around longer, and they have a more defined agenda, albeit one that doesn't exhibit much restraint when it comes to releasing b-sides and outtakes.

While Thou have developed quite a bit over that lengthy discography, the basic template remains: skeletal rhythms, guitars that vomit static, the shrieking of pterodactyls, and enough feedback to give zombie Peter Steele a necrophile erection. This is the soundtrack to a movie that got rejected by thirty studios and can only be sold through the mail.

Once hideousness is accepted as the basic theme, style and context become apparent. Thou are one of many bands currently participating in the blending of sludge with black metal, but they approach the template with an inverted strategy. Sludge is the base, and black metal is the seasoning. This reaffirms a thesis that I’ve held for some years now: black metal and sludge may be ideologically opposed, but they have many similar musical underpinnings. They also bear comparably distasteful fruit.

I thoroughly enjoyed this EP, though whether or not Thou shall become thine depends upon your tolerance for acid reflux.