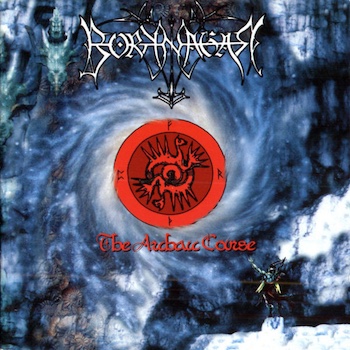 Alas, all things in time must come to an end. When I first purchased this CD from Borknagar, I was horrified to find that firstly when putting it in the CD player, that the running time was a shade under thirty-eight minutes, not something you’d expect from Borknagar, when listening to "The Olden Domain" and their self-titled epic, both which run a shade under three-quarters of an hour.

Borknagar, with this album, have done away with Garm (Arcturus and Ulver), as their lead singer, and replaced him with ICS Vortex (who did some work with Arcturus). Vortex’s vocals whom many of you would be familiar with Dimmu Borgir are of a rather ‘different’ nature than the standard thoroughfare black metal nature. Lyrics are concerned with a more universal theme, than their last album, which was more dependent on nature. Lyric topics are similar, to Vintersorg’s latest effort, "Cosmic Genesis", and have strong universal and grandiose lineage. The music departs somewhat surprisingly from a black nature, to perhaps, (dare I say) progressive element surrounding parts of "The Archaic Course". The pace of this album is toned down, and a more gentle listen on the ears.

Oystein G. Brun brilliantly writes music for Borknagar, and is a real asset for the band, with such solid songs, it is really hard to see Borknagar going astray in the future. This CD is a wildcard in the band’s discography yet it does contain some extremely well played and composed songs. "Universal" and "Ad Noctum" are two of the band’s finest musical moments, the latter using a Hammond organ in the structure of the piece, and giving a decisively retro feel about it.

Bottom Line: If your willingly to depart from the traditional sounding black metal packs of musicians in the world, give this CD a spin, if not, steer well clear as this CD may well poison your mind. Vortex adds a new dimension, and Borknagar walks down a different path as a result. An interesting future ahead.