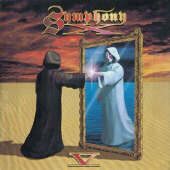 One of the better bands in the progressive genre, in 2000 Symphony X offered up their fifth album, “V: The New Mythology Suite”. Being that “V” was one of the most anticipated releases of the year 2000, Symphony X weren’t about to collapse before their fans. They didn’t fail, and “V” has become many fans favorite Symphony X album. However, “V” is little more than the band making small refinements on their sound and playing the game safe.

Who can blame them? They’ve simply got their game perfected. You can’t quite go wrong just making minor adjustments to your sound with each album. But that’s my biggest problem with Symphony X. I don’t quite know where has the identity gone after so many records. A song from “The Divine Wings of Tragedy” could have easily made it on here and would have fit right in the whole scheme of things. However, “V” as a whole is probably the most consistent and even flowing album Symphony X has created. It follows a whole theme, and is really just a one-hour song divided into thirteen different parts. I guess those tiny adjustments do account for something eventually.

As always, Symphony X’s arrangements are full of many different characteristics. The classical arrangements range from truly professional and beautiful vocal sections, piano interludes, and some of the excellent varying guitar-work. Symphony X also creates a mixture of moods, ranging from melancholia to some downright sinister sections, and even some more uplifting moments. Yet even with the many changes Symphony X still manage to keep their sound free of any out of sync segments or displeasing segues.

The atmosphere of the album is fantastic, as always. The synths create a wonderful backdrop to Romeo’s ripping rhythm guitar, and also manage an interesting interplay when Romeo decides it is time to do a little shredding. As for Russell Allen, his vocals haven’t changed much. They’ve always complimented the music well, Allen not ever passing the sensitive barrier of cheesiness, nor trying to steal the show like the instrumentalists do, since it’s obviously theirs.

Bottom Line: Symphony X may have created the best album of their career, but it is a bit disappointing since it wasn’t anything unexpected. My advice is for them to quit playing it safe, experiment with their playing styles and the sound of the band which they’ve defined a countless amount of times.