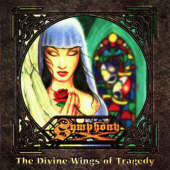 Type:
Release Date: 1997
Label: InsideOut Music
Genre: Power, Progressive
1 Of Sins And Shadows
2 Sea Of Lies
3 Out Of The Ashes
4 The Accolade
5 Pharaoh
6 The Eyes Of Medusa
7 The Witching Hour
8 The Divine Wings Of Tragedy
9 Candlelight Fantasia

God damn I hate reviewing Symphony X albums. It’s quite a difficult feat for me, honestly. But damnit, they deserve to be reviewed. Their power/progressive mixture and uniqueness is great. They combine freakin’ awesome musicianship without sacrificing great song writing, and “Divine Wings of Tragedy” is arguably the bands defining moment.

For the unacquainted, Symphony X plays a unique brand of progressive power and thrash. Their music goes unparalleled by their competition, particularly Dream Theater. These two bands are in fact very similar. The difference, you ask? Symphony X can actually compose the structure of a song well. While I say they are in fact very similar, at the same time they are quite different. First off, the keyboards are a bit different. Symphony X keyboardist Michael Pinnella definitely does a bit more interacting with the guitars, shredding, and also does a lot more for the atmosphere of the record. Symphony X’s music is also very classical influenced, while still sticking to metal. To sum it up, Symphony X play well structured, classical influenced metal with a tinge of theatrics to it.

There really is no weak link in this band. The guitars, the vocals, the bass, the drums, everything is incredible. Let me say, vocalist Russell Allen is phenomenal. He has a nice range, his vocals seem very natural, and he isn’t annoying. He’s got a nice voice and doesn’t try to steal the show, something of which vocalists of progressive music really shouldn’t do. He knows his place in the band, and sticks within his boundaries. The guitars are amazing. Excellent riffs, and the guitarist isn’t masturbatory. Michael Romeo has a great sense of melody and knows what to play, and when to play it. The rhythm section usually keeps the instrumental chaos together, but at times is still able to take the spotlight. Bassist Mike LePond is awesome, and is not buried in the mix. To do that would be a shame, for he’s awesome and really contributes to the songs. Last, but not least, keyboardist Michael Pinnella is as equally talented as his band mates, and does an excellent job of showing of his talent when it’s called for, but always strengthening the band, particularly the atmosphere. Basically, the band has no weaknesses talent-wise, and that includes both technical ability and song writing ability.

The album opens with ‘Of Sins and Shadows’, a song with a quite thrashy rhythm, and very melodic leads, also showcasing Russell Allen’s excellent vocal harmonies. Following that song is ‘Sea of Lies’, which definitely gives the bass a lot of room for some awesome breaks. ‘Out Of The Ashes’ starts great and ends great. The intro has a great interplay between the keyboardist and bassist. It’s a shining moment of the album, and almost comes across as popish, but is very honest. ‘The Accolade’ starts off with a great pastoral clean guitar, and a laid back atmosphere. It’s on this track where Pinnella really shines. ‘Pharoah’ has a monumental chorus and is very catchy and memorable. The next track, ‘The Eyes of Medusa’ has a lot of great keyboard atmosphere on it. It also has some very heavy guitar lines, tossing in some interesting pinch harmonics to make it more interesting. ‘The Witching Hour’ is very classically influenced, with a great chorus. The title track is twenty minutes of pure Symphony X. It’s very epic and classical, with great features from everyone in the band. It kicks ass almost the entire way through, and is a great song. The albums closes with ‘Candlelight Fantasia’, a track that is somewhat a ballad. It’s very melancholic, and an excellent way to end.

Like many people, if you were introduced to the band with their 2000 release, “V”, don’t think that that record is the only highlight of the band. “The Divine Wings of Tragedy” basically slapped every progressive metal fan in the face and told them to wake up and listen to what the band had to say.

Bottom Line: “The Divine Wings of Tragedy” is a progressive metal masterpiece that needs to be experienced by all!