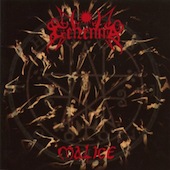 Gehenna's second album was released during the peak phase of Norwegian black metal. The churches did not burn anymore. Vandalism had made room for ingenious music and this was a wise move. A lot of bands popped up everywhere in the mostly natural land of the fjords. Due to the restlessness of their compatriots, the girl and the boys of Gehenna pulled out all the stops to publish a great album. Almost overpowered by their creativity, the Norwegians enthused the listener with a highly varied programme. But first of all, let's have a look at the production.

Guitars and keyboards were on an equal footing. It was a matter of personal taste: one could be of the opinion that the strength of the keyboards led to a relatively sticky sound. But from my point of view, in particular the equitable coexistence of guitars and keyboards generated a high degree of density. The punchy drums and, of course, the throaty vocals had also been adequately taken into account during the recording session. Unfortunately, it was hardly possible to figure out the contribution of the bass player. However, let us consider this as a minor flaw.

In terms of the production, the main thing was that the final mix did not lack of pressure and harshness, although the keyboards played an important role. Quite the opposite, the album distinguished itself by its haunting and sometimes cold atmosphere. It was another kind of coldness than that of Darkthrone's "Panzerfaust" or Immortal's "Pure Holocaust". Gehenna did not operate in a similar manner. The endless Norwegian forests did not appear in front of my inner eye. Despite a fairly melodic approach, the band occasionally created a type of industrialized frostiness and misanthrophy. Thus, it came as no surprise that the apocalyptic and powerful 'Ad Arma Ad Arma' matched perfectly with the album's aura, at the latest during its mechanized ending. Apart from that, this dark and seemingly overlong piece did not become tedious. Its playtime of 14 minutes was exactly the right format. But the best is yet to come: this colossus was framed by an amazing number of further black metal gems. Already the opener left its mark in an impressive manner.

The disturbing riff at the beginning opened the door to the soundscape of Gehenna. The purposeful guitars as well as the spooky keyboards formed a strong first track. Not at least due to its dynamic chorus, 'She Who Loves The Flames' became a black metal earworm. It was catchy enough to be almost unforgettable and black enough to become the new sonic darling of the genre fans. And Gehenna were not afraid to work with this compositional formula more than once. 'The Pentagram' or 'The Word Became Flesh', for instance, headed in the same direction. Furthermore, they also made clear that Gehenna had an amazing talent for creating fantastic black metal tracks with occasionally melodic parts. But I have to admit that almost each and every song could be viewed as a masterpiece of Norwegian's darkest art. Highlights like 'Manifestation' were simply impressive. But if we look at the big picture, we realize that the band managed to follow strictly its preferred direction during the entire full-length without lacking in quality. Due to the massive amount of high quality tracks, the malicious storm that Malice (Our Third Spell) created was undoubtedly suitable to put you immediately under its spell.