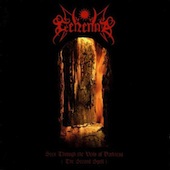 It is approximately 25 years ago that a country catapulted itself on the metal map. Due to the early works of Immortal, Mayhem, Burzum and so on, it came to our conscious with the uttermost vehemence that Norway did not only have a pretty metal-compatible nature (cold, dark and hostile), but also a creative resource nobody had previously been aware of. The phalanx from the fjords attacked on a broad front and Gehenna's first EP satisfied all those who were interested in atmospheric slow-to-mid-paced sounds. Seen Through the Veils of Darkness showed a slightly modified approach. Today we know that the band changed its style more than once, and certainly not only for the good. But here we have no drastic reorientation. Gehenna took the more or less logical next step. The material has more craggy parts. Already the opener surprises with some fast eruptions. The voice is also more aggressive than it was on the EP. Finally, the level of complexity has increased as well. A song like "Angelwings and Ravenclaws" that ran steadily like a silent river does not show up on the here presented work.

The more extrovert style does not disfigure the musical approach of the band. Despite the gain in vehemence, the melodic component remains a relevant feature. The same applies for atmospheric elements. In my opinion, the keyboards are not too dominant, but they do their best in order to shape pretty spooky tracks like "A Witch Is Born". The battle between the guitars and the keyboards results in a slightly turbid sound. Seems as if the album has been recorded through the veils of darkness... but that's not bad, the mix also has an opaque facet that fits the Norwegian origin as well as the group's musical orientation. I am nearly tempted to say this is the perfect sound for songs like the dense, compact and quite straight "The Mystical Play of Shadows". The only negative thing I can say about this track is that it sets the bar too high for the next tracks. The uninspired "The Eyes of the Sun" constitutes the filler of the album - and the overlong next track also does not fully convince me. Its configuration lies in close proximity to some opulent Cradle of Filth pieces and after having dropped this name, I feel bound to mention Dimmu Borgir as well. Those of you who seek a less relaxed version of "Stormblåst" will probably find the album that makes your day.

I wish I could "Through the Veils of Darkness" call an excellent classic. It has a spiritual touch, the right balance between atmosphere and aggression and its best pieces have nothing lost of its fascination. No doubt, it is a classic, but "only" a good album, because the last third does not hold exciting highlights. In addition, the slightly awkward yet fascinating charm of First Spell, which was evoked by its somehow natural flow, does not occur again. Simultaneously, nothing already indicates the coldness that partly formed Malice (just think of the almost industrialized "Ad Arma ad Arma"). Nevertheless, the full-length holds a lot of great melodies to discover. "Shairak Kinnummh" sets standards, but "Lord of Flies" uncovers some mighty harmonies as well. It is still a pleasure to lend an ear to this work. Despite its minor flaws, I admit that it has a firm place in my heart, because it belongs to the roughly twenty works that always come to my mind when thinking of the Norwegian black metal heyday.