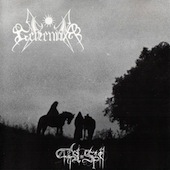 Gehenna's first publication was one of those outputs that defined the seal of approval "Norwegian black metal". This was remarkable, because the band did not focus on the usual stylistic elements. Gehenna had not the intention to set up a new speed record. Maximum heaviness was also not the goal. The group rather emphasized the aesthetic aspects of the Nordic metal revolution. The black and white artwork expressed the mood of the songs in a highly successful manner (please note that it did not show an icecold winter landscape). While offering a ghostly atmosphere of loneliness, the monotonous music seized you inevitably. This happened because the said monotony seemed not to be an expression of creative helplessness but a carefully used stylistic device. Furthermore, the minimalistic and easily understandable melodies knew how to please, albeit they were mostly formed by the keyboards. What is more, Sarcana, who played this instrument, was even allowed to perform solos. Is this still (black) metal? Well, if I am not mistaken, this genre was invented to break conventions.

The dismal aura was only interrupted by the fairly harsh third piece 'Angelwings And Ravenclaws' which was more lively than the other songs. Despite its more powerful composition, it appeared as a sunbeam that suddenly broke through the dense clouds. But it was not able to warm the earth sustainably. The remaining pieces followed the joyless pattern of the first two songs.

The invoking voice matched with the dark ambience that was created by the instrumental section. Life seemed to be a long and silent river. The reposefully flowing songs did not offer tempo changes and the permanent repetition of the melodies led to a special sort of catchiness. Everything was kept comprehensible and complexity was definitely not the name of the game. The drums, for example, had only one task, namely to keep time. I am fairly sure that this was really their preferred compositional approach. But maybe they also just made a virtue out of necessity due to their not yet fully established technical skills. In any case, the result spoke for itself. As you know, simplicity is not as easy as it seems. Therefore, it is all the more noteworthy that all songs were able to convince. In terms of quality, the differences between the tracks were minimal. Without being hypnotizing, the tunes had a strong effect on me.

The production walked the thin line between harshness and atmosphere. Fortunately, everything went well. The keyboards did not sound too sweetish, the guitars did not kill the mood. Everything was more or less well balanced so that the mix caused no reasons for concern. This applied especially to the fact that First Spell was the debut of these somewhat eccentric trolls. From our present point of view, maybe we find it difficult to describe this relatively soft music as black metal, but it's a nice document of the Norwegian spirit at the time of its release.