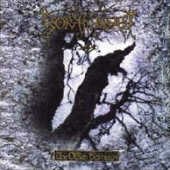 The Olden Domain features the vocalist from Arcturus’ Le Masquerade Infernale. That’s the first thing I noticed when listening to this album. This effort is also a good start for a band that used a more black metal palette with folk influences and moved on to add more progressive elements to their sound.

However, I believe this band has always had the edge over the related Vintersorg because of a more unique and left-field approach. In fact, the band probably has more in common with the Norwegian oddballs Arcturus in their approach. The songs on this album feature numerous appealing guitar riffs that seem to be the perfect background to grow into more avant-garde directions in the future. The songs also benefit from the folk element that Borknagar has always maintained and that adds more colour to the overall scope of the tracks on this album. Regardless, even in its earliest steps, it can be seen that the band has a compelling approach that separates them from other bands that might seem to share some similarities to them. The potential that the band holds is unfortunately held back slightly by a production job that doesn’t quite do the songs complete justice. It’s sufficient, but lacks power and clarity. Making up for this, however, is a sound that has undeniably made its mark as the classic type because of catchy song structures and wholly memorable ideas. It’s also an interesting new direction for the black metal genre that began to diverge in neat new directions with albums such as Anthems to the Welkin at Dusk at around the same time.

There are many highlight tracks on this album, among them being the operatic To Mount the Brave. As a reissue, an album this strong will always be worth picking up. While I may point to Quintessence as being the best Borknagar album, The Olden Domain is certainly a close contender to that throne. As such, this reissue demands your utmost attention.

Labeled, as the mother of all supergroups, comprised of members from bands such as Arcturus, Ulver, Enslaved, Gorgoroth, Immortal and Molested, Borknagar could be attributed to be trying to cash in on their supergroup status, this fortunately is not the case, as we are witness to a group of extremely talented musicians, some at the height of the musical prowess.

"The Olden Domain" is what really shot Borknagar through the cannon into black metal infamy. ‘Epic metal’ tagged by guitarist and mastermind Oystein G. Brun. And epic metal is exactly what this music is. The lyrics sung by infamous vocalist Garm are of a Viking nature and tend towards nature as a pose to the great struggles of religions sung by other black groups. Garm’s vocals range from the standard black screams to operatic, beautiful clean chants, which are probably what he is famed for. Unfortunately for Borknagar, Garm is no longer with them, as he spread himself too thin over other projects. Music is very fast paced and sets a good tempo to harbor Garm’s remarkable singing. Drums remain consistent throughout the 44 minutes of playing time. Guitars are quite awesomely played, quiet catchy riffs, and beautifully played acoustic parts reminiscent of Satyricon’s "Nemesis Divinia" with fantastic melody.

No songs really stand out all that much, there are only 8 songs on the album, but range from between 4 minute instrumentals to 8 minute epic tracks. Personal favorites for me include "To Mount and Rode", which has the most memorable chorus ever present in black metal. "The Dawn of the End" has an awesome title and is encompassed by some lovely interplay between bass guitar, guitars and Garm’s vocals.

Bottom Line: This isBorknagar’s best album and if they could hold down a permanent singer, (ICS Vortex and Garm have both gone, Vintersorg is now handling those duties) they would truly become a mastermind at the forefront of Epic and Black metal outfits.