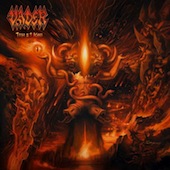 Some things in metal music are pretty much expected and accepted standard these days: the music is loud, the music is fast, the music will invariably piss off your family and assorted religious groups, and Vader will always deliver a right cross to the throat in the most simplistic form possible. Tibi Et Igni is, of course, no exception to this coveted rule. This now becomes a question of why Vader can seemingly do no wrong, and the answer is because the band is just that brilliant.

What can be said about Vader that isn't evident in the long and epic career they have? Poland's pride delivers yet another 40-minute slab of death metal with all of the tempestuousness and volatility you'd come to appreciate from them. The opener, "Go to Hell" pretty much sets the stage for what is to come, and not a single second of it is less than Vader's standards. Peter's vocals are some of the best of the genre, with that familiar friend growling and barking horror over raucous, lightninng-fast riffs straight from Hell. What has impressed me about Vader since 1992 is how the band manages to create some of the finest death metal music this side of the Florida keys without giving way to over-production or boring, repetitive nonsense for the sake of a legendary name. Much like fellow DM legends Master, Vader follows a formula befitting the lineage of pride the band has behind it.

"Triumph of Death" is one of the single best tracks I've heard the band do in a decade, and with as much as I hail pretty much everything they've ever done that speaks volumes for me. Its catchy and very "metal" chant of "to the grave...to the grave...still marching on!" can very well be the extreme version of Judas Priest with all of its stylish bravado that is perfectly devoid of pretension and infringement on past ideas. I will go as far as to say this is the best Vader album in the last ten years, even edging out Welcome to the Morbid Reich by the slimmest of hairs; it's simply amazing from start to finish. There are, of course, those that would say that Vader's sound is stagnant, that the band doesn't go anywhere new or "take chances" with its music. I dare to say that Vader takes a chance each and every time a new CD is released; by not acclimating to the Hot Topic crowd as one of our Los Angeles-area bands has seen fit to do over the last decade-plus they walk out on there on that ledge and keep the product familiar, yet widely innovative and interesting. I can't ever accuse Vader of being dull or "samey" in its output. The familiarity that is the band's signature sound in the vocals and the guitar tone is hardly a recipe for hum-drum complacency.

With every caustic shredding opportunity that presents itself in tracks like "Hexenkessel" or "Abandon All Hope," which is also about as close to black metal as the band gets without crossing that ever-thickening line. By all accounts, this is the most evil and lyrically dark record I've heard this year, and upon each added listen it gets more evocative and sinister, and that guitar tone is just as dim and overpowering as it's always been. Even when "The Eye of the Abyss" begins with its serene, symphonic Phantom of the Opera music you know the bombastic delivery isn't far away; what I can only call the best power metal effort I've heard in the last 20-years gets summarily decimated under the heavy boots of brutality and angry chord changes in what might well be the band's "slow" track on the album. It doesn't come much better than this, folks. Seriously.

Vader never fails to influence, impress and engulf me, and I cannot recommend Tibi Et Igni enough. Buy this yesterday and become one with the flames sure to spill over you as you find the most vivid visions of the underworld that you'll ever hope to see while still upright and lucid.

At this point I don't think Vader needs any introductions. For almost 30 years Peter and Co. have consistently put out quality material with unmistakable sound that can only be described as 'Vader sound', and since they very rarely strayed from their path, saying that Tibi Et Igni is a very good, high caliber 'Vader album' should be more than enough to describe current release. But wait, there's more.

I truly believe that new album is well above any material that Vader has released in a while. Maybe it's because the current lineup has been together for at least couple of years, or maybe Peter finally let other members chime in into creation process, but Tibi At Igni is fresh, vibrant and firing on all cylinders. Starting with opening 'Go To Hell' where symphonic intro feels like a prelude to a full attack, Vader is brutal and uncompromising. From stand out riffs through more varied songwriting and more memorable guitar leads and solos Vader reloaded its arsenal, and with hits like thrashy 'Triumph Of Death', battle hymns 'Hexenkessel' and 'The Eye Of The Abyss' they aim to bring down venue after venue with those sure to be new fan favorites. There are no surprises, no experimentations - just straightforward death/thrash metal from the beginning to 'The End', and even after 30 years of existence I'm convinced no one wants to have it any other way. Vader was put on this earth to bring battering and headbanging music and I'd rather throw knives with blind monkeys than listen to progressive, post-metal album from Peter's death squad.

Anyone who thought that Vader have had its best days behind them, better pick up this record and be prepared to revise his/her views. Vader might have lost a few battles in the past but they're still winning the war! Tibi Et Igni is a quintessential album from Polish veterans but it stands above its predecessors with more militaristic vibe and delightfully thrashing rage.