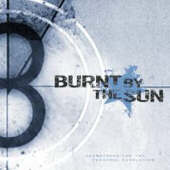 It's bands like this that make you reassess your whole idea of what music really is. After one listen the average person would be content to brand this whole album as nothing but "noise", but what does the average person know? Burnt By The Sun is another valiant newcomer to the Relapse family, infusing young life into their roster with a bold distinction. Pulling in influences from a rich variety of extreme music styles (typically those ending with "core"), they've busted out a promising album of chaotic metal.

This is not a disc for those short of attention span. The music is a clamor of polyrhythmic arrangements, insane drumming, and powerful vocal assaults so your best bet is to focus on the rhythm and let the confusing guitar sections and the rest fall into place. The songs move at almost an incomprehensible pace, so as soon as you figure out what's going your song is already over. In fact, the entire album is over in less than thirty minutes. So, you better perk up your ears and give it undivided attention. Slow parts are rare but they do advent in the form of heavy, bass-driven, chugging riffs that you can actually head-bang to. The absence of any kind of intelligible song structure makes "Soundtrack..." an album you can virtually listen to a hundred times without getting bored. In other words, there is something new in every listen. My favorite pick would be the final heavy anthem titled ’Human | Steamroller.’ Indeed like some monstrous metal steamroller, it chugs along loaded with fast, heavy riffs and plenty of hooks and groove.

While the album may not change your entire perspective on life, like the ambitious title suggests, the lyrics show enough sense and intelligence to make you stop and think for a while. Thematically, they talk about the common faults of society and generally the same pessimistic, negative prattle that we get from most metal bands, but here it's done with a slightly tongue-in-cheek attitude, apparent from some of the comical song titles, ie: ‘Dow Jones and the Temple of Doom;" ‘Boston Tea-Bag Party."

Bottom Line: An extremely complicated work of art but some of the most original extreme metal Relapse has ever put out.