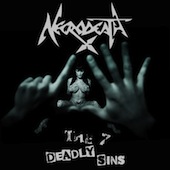 Metal musicians have been always fascinated by sins and to write a concept album about the seven deadly sins is not an entirely new idea. As far as I can see, Grabak was the last band that dealt with this subject on their album "Sin", released in 2011. They had the same problem as Necrodeath - seven songs are simply not quite enough for a full-length. While Grabak solved this problem smartly by adding a prologue and an epilogue, the solution of Necrodeath is less convincing. They offer two re-recordings of tracks that were first published on their fairly legendary first albums of the eighties. This does not really fit into the context of the lyrical concept, albeit it has become an established tradition that Necrodeath recycle their early tunes one by one. Naturally, these tunes sound great and they prove that the band has remained true to itself through all the years, perhaps with the exception of their release in 2007, the more or less experimental and mediocre Draculea. I would have preferred, however, two further new songs of the same high quality. The bottom line is that these re-recordings sound fresh and they are worthy to be promoted by the powerful, modern production. Nevertheless it must be said that these pieces are not a substantial constituent of this output. Therefore, it is high time to turn the spotlight on the seven deadly songs of The 7 Deadly Sins.

To put it in a nutshell, Necrodeath have written songs according to the principle "more of the same". The album's flair and style breathe the spirit of their earlier work, for example 100% Hell. This might not sound like a very innovative approach, but nevertheless I am thrilled of the result. Once again, you get everything that characterizes the music of the Italians. This means that they repeatedly offer thrilling morbid melodies, aggressive eruptions, a lot of up-tempo parts and the distinctive vocals of Flegias. This guy represents a natural weapon against the army of competitors due to his outstanding performance. While offering a diversified range of pitches, he knows very well how to create an insane atmosphere that adds a certain something to every song. But naturally he is not the only one who contributes to the success of this output. For example, drummer Peso, the last remaining founding member, shines again with percussion contributions that are unusual for the genre while having become his personal trademark. And not for the first time, Flegias gets support from a female voice even if only in one song ('Greed').

Necrodeath have definitely found their way that leads them through the narrow alley between control and chaos with instinctive sureness. Morbid melodies - 'Gluttony' features the best one - get blown away by hectic outbursts and vice versa. But all the while, they keep in mind their biggest goal of creating impressive songs that smoothly lead to a formidable flow of the album. The lyrics are written in English, Italian and Latin. But in view of the album title, I think that I do not need to describe their content. To summarize, The 7 Deadly Sins shows a professionally working band which is still hungry. Unfortunately, this is nowadays not something to be taken for granted. Too many groups seem to publish their new records just for having a reason to go again on tour. Finally, what remains to be said? I have to admit that I am married, but the cover girl is surely worth sinning for.