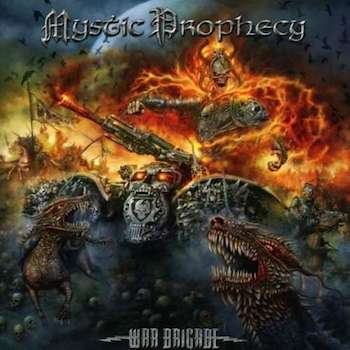 Some bands are really exciting. They modify or change their style constantly and you never know what you get when buying their new output. Sometimes this concept works, but I must say that groups like Ketzer or Tribulation committed musical suicide while following the strange dogma of never-ending change. Mystic Prophecy do not join the ranks of the formations that are always driven by a desire for change. Quite the opposite, they are representatives of the conservative protagonists that preach the "more of the same" ideology. This might be less exciting and sometimes this principle stinks. However, it lends the dudes authenticity and it makes them to reliable partners of their followers - and I like reliability in any kind of relationship. Please be aware that any kind of unexpected trouble endangers my health!

Conservative - this term also describes their style very well. Mystic Prophecy play generic heavy metal, the lyrics are filled to the brim with stereotypes and the song patterns pray to the verse-chorus-verse Gods. The endless repetition can raise the question whether one should buy more than one album of the band. Well, the answer is simple. Each and every album of the band holds a certain number of good songs. This does not rule out a slightly lame start. "Follow the Blind" and "Metal Brigade" fail to deliver the necessary degree of aggression. But the generally speaking, the experienced group is able to combine the main pillars of classic heavy metal, power and melodies, in a clever manner. "The Crucifix" shows the skills of Mystic Prophecy impressively. The guitars create a very good flow, the rather gentle verses lead smoothly to the catchy chorus. The lyrics are nonsensical ("six six six crucifix"), but this kind of poetry has an almost folkloric touch. Mystic Prophecy are not able or not willing to write other lyrics and at the end of the day, it does not matter at all.

Of greater importance is the fact that songs like "Pray to Hell" or "Good Day to Die" demonstrate the force of typical heavy metal. The formula stays the same: the songs are easily accessible; the chorus is put in the focus and melodic lines are well embedded into a heavily rocking framework. The voluminous voice of the lead singer does not lack charisma and therefore Mystic Prophecy do not need to shy away from comparison with their competitors. Okay, their emotional sections are always going wrong (the beginning of the sixth track is terrible) and it is beyond my imagination that the dudes will ever release a 90+X % album. Nevertheless, they manage their main tasks skillfully while offering very robust, crusty headbangers such as "The Devil Is Back" - and they know how their music must sound. As a consequence, the production is once again a strong argument for the purchase of this output. On the one hand, it lends the music a powerful, clean and well-defined appearance, on the other hand, it makes clear that the band has a professional attitude and knows what its fans want to hear. Okay, I miss a new "Evil Empires", the thrashing highlight of their discography, but this is probably my personal problem. In a nutshell, I still buy the outputs of Mystic Prophecy, but I have turned my back on many chameleonic formations. Spiritual metal brothers stand united, regardless of the fact that all that glitters is not gold.