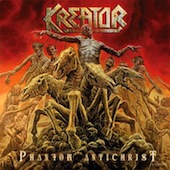 Kreator have made a lot of dubious decisions during their career. Or was it just Mille? It doesn’t matter… I know, the objective situation speaks another language, but this is my review and here I am the dictator who has the final say. I mean just think of Endorama, think of the day they took Ventor's mic away or of the crude justification why they did not give 'Wolf Child' a place on Phantom Antichrist (“it did not fit the context of the album” – thank God, an honorable reason. How could I be so naïve to think they just wanted to make some extra bucks with the Civilization Collapse EP?). Nevertheless, I admit the band has reached a very professional level of musicality, for better or for worse. From this it follows that the dudes are able to pen and perform smooth and partly catchy songs without killing their vehemence completely. Phantom Antichrist documents this. It is no bad album, but it rather scores with non-typical elements for a thrash album. However, it is still thrash and not that overly polished, pretty meaningless kind of material they presented on their stinker from the year 2017.

Unfortunately, the band has totally lost its once uncontrolled aggression. I know, no new finding, but again and again, it’s sad to experience it. No, I am not still waiting for “Endless Pain Part II”, but a few elements of insane brutality would have been fine. The formation stays within a frame of calculated violence. It’s not an overly narrow one, but it seems as if they have taken fright at their own courage. Sometimes calm sequences stop the rise of intensity and that’s a pity. Solid riffs and a basic heaviness do not deserve this kind of variety and it feels good to listen to a more or less real neck breaker like 'Civilization Collapse'. Thank God, this song fits the context of the album and my worst fears did not come true!

Moreover, the tribal drumming that opens this song also sounds the bell for the best part of the album.'United in Hate' has, despite its nonsensical title, enough fire to burn all barricades that stand in its way. The truly swift drumming drives the verses forward and the voluminous chorus delivers catchiness minus cheesy elements. A good tune; it shows that the band is still ambitious without always falling victim to pretty commercial patterns. 'From Flood to Fire' represents the other side of the band’s ambitions – a comparatively commercial track that wants to be moving, yet it sounds rather lachrymose. Yet I wanted to describe the best segment of the album. 'The Few, the Proud, the Broken' finishes this part, it offers inter alia a very strong instrumental part where the guitars mix straightness and power. Once again catchy parts show up, the main riff leads the listener to the core of the song and even Mille’s wannabe-evil voice does not hurt the coherent overall picture. No doubt, this piece boasts with a very good balance between aggression and melody.

Needless to say that the sound is flawless for “overground thrash”. It’s not too dry and not too juicy. In its best moments, Phantom Antichrist delivers a fine slap in the face of the listener due to its clearly defined, vigorous sound. On the other hand, tracks like 'Your Heaven, My Hell' do not detonate. The pretty unmotivated chorus is going nowhere, and both the silent beginning and the more powerful verses do not provide anything new. Generally speaking, the last three songs of the album do not impress with an overdose of tension, even though 'Victory Will Come' has some mighty (yet very typical) sequences. Anyway, Phantom Antichrist can give you the impulse to bang your head and have a - partly - good time. The eighties are gone and even I-don’t-listen-to-metal-when-I’m-at-home dudes like Mille have the right to development. By the way, this private banishment of metal is another one of his dubious (or simply wrong) decisions.

Definitely a step up from their previous release entitled Hordes of Chaos, this release is heavier and way more aggressive thrash metal played with utmost intensity. I'd say it's about as good as Enemy of God, but nothing tops Coma of Souls. However, these guys flourished during the 80's (1985) and then went to hell during the 90's, then came back with vengeance with Violent Revolution. Here the lead guitar work is much more well played out plus of course rhythms that are definitely original with a combination of tremolo picked riffing plus some fretboard chaos. A solid production definitely with an even keel of mixed tempos, but overall plainly original.

45+ minutes of brutality and mixture of thrash with some clean guitar playing. However, most songs are heavy and filled with monumental distortion and utmost speed. The riffs themselves are wholly well constructed. Mille's vocals have never changed and they fit well with the guitar and intensity. This album is just so much more enthusiastic with riff-writing frenzied guitar featuring amazingly fast frets played with vigor. A great one to pick up and a Kreator release that can't be outplayed. I really think that this is a monument because it's so aggressive and catchy.

Some clean tone guitar exhibited here, however, mostly what is gripping are the distorted riffs. A lot of it reflects the past with all of the aggression and utmost originality. I dug most of the guitar on here because it's played with precision. These guys don't fool around when it comes to belting out fury in their music within the genre of thrash metal. This is definitely what they play their best. The leads are definitely much better than on Hordes of Chaos. They don't overdo it with them either. The bulk is within the rhythm guitar work. Much better played than their predecessor.

The music is the highlight of this release. It contains all elements of metal and they mix up some songs with a bit of clean tone guitar. Not the whole album is wholly aggressive, just most of it. Mille sounds extremely pissed off here which fits well with the distorted guitar work. A lot of their lyrical topics have been exceptionally interesting to me, just the music and the vocals. The recording quality here is phenomenal. Everything is well mixed in there. The quality here is exceptional and everything flows diligently. The bass guitar could have been a bit louder and that's my only complaint.

If you want an album that is fast and furious, thrash metal galore, and just overall a plain original sounding and awesomely well played out, Phantom Antichrist hits home with vigor. You'll find everything here so balanced out. The lead guitar, rhythms, clean tone melodies, great chorus pieces, and mastermind production sound, this album is for you. I didn't think too highly of it until I listened to it maybe 4-5 times. Then everything to me seemed to fit into place. Again, nothing tops Coma of Souls, but this band really makes a dent in their discography meaning that it's an album that hits home in all aspects.