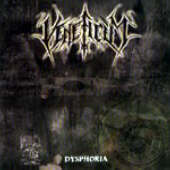 The American Black Metal scene has never had the greatest reputation for being innovative and groundbreaking. Veneficum is here to change that. Their debut album "Dysphoria" is a 43 minute journey of deep, rich atmosphere, propelled by vicious power.

The first track, Grace Overthrown' is a great introduction to what Veneficum has to offer. Blazing, yet memorable guitar riffs drive the music and well-played keyboards don't take anything away from the power and dark feeling of the music but rather enhance the intensity of the track.

The second track, 'A Releasement Black Aura' starts out with a surreal keyboard intro and top notch double bass drumming from Nacht. It then builds upon itself with one epic section after another, then speeding up into a frenzy, and then effortlessly slowing back down and ending the song on a somber note. The drumming on this track is really tight, with an abundance of creative tempos and fills.

'Twisted Emotional Silence' initially gives the feeling of Dimmu Borgir's "Enthrone Darkness Triumphant" era, but than launches into a full scale assault, before morphing into a haunting mid-section. Mendoz and Ceja's guitar work really stand out on this track; both play with lightning fast speed and precision. Antarktis' keyboard talents really shine through on this song. He is good on all the songs, but this one is truly amazing.

The last true song on the album 'The Manisfestation Nocturne' is the stand out track to me. Everything on this track mixes together so well, creating a massively powerful dark atmosphere. Reymond's vocals are in top form on this track, with him showcasing a wide range of styles, from a scathing black metal scream, to slow, doomy death vocals. The song ends on a high note with a beautiful guitar solo as the album fades out.

This is an excellent album, through and through. This band incorporates so many different influences, but doesn't come off sounding like a rip off of anyone else.

Bottom Line: Whether your into fast, evil black metal, or the more symphonic stuff, this album will satisfy your black metal cravings. The artwork and packaging is also very well put together by the band. The production is perfect with each instrument clearly audible and powerful. The only complaint I have with this album is that it's too damn short! Only four really songs and a great keyboard outro! Despite this, it is still worth every penny.