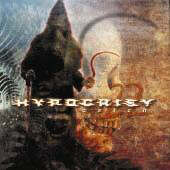 I don’t remember when the last time was that a metal band created so much controversy over the sound of its new album before the release date, do you? Opinions on techno to nu-metal to the death sound of old Hypocrisy are circulating on the forums, message boards and what have you. Since I always was a big fan of their work, all this talk only increased my cravings.

So, what is it? It’s Hypocrisy, and if you’ve heard their previous work then the name of the band should be more than enough to get the taste of “Catch 22”. Where are all these people getting “nu-metal” from? I can agree with some Pain (Peter’s side project) moments that incorporate clean melodic and catchier vocals and some keyboard samples but comparing Hypocrisy to nu-metal is simply outrageous. Either those people have never heard nu-metal (don’t rush to change that) or simply Mother Nature played a trick by replacing their eardrums with marbles.

Maybe they’re not as extreme as they used to be but have they ever really strived for the extreme sound? Memorable riffs, melody and unique sound were always Hypocrisy trademarks and in this department nothing changed on “Catch 22”. In my opinion, tracks like ‘Edge of Madness’ or ‘Hatred’ only added a new dimension to their music and gave them much wider range of music possibilities and saved them from chasing its own tale on subsequent albums.

Bottom Line: This might be one of the best overall Hypocrisy albums ever. Each song with its own identity, melody and right amount of power stays for days in the head and guaranties multiple plays without boredom.