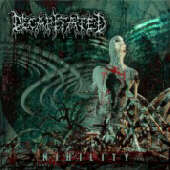 Decapitated's second album. A true beauty in the death metal genre. It’s obvious they took a new turn in their music, but they made a great turn.

Talk about technicality and brutality! With the new direction the band has taken since their debut, they presented a new style they'd show throughout all of their future releases. On this record, they manage to keep everything structured and musically advanced while having everything brutal and heavier than before! It opens up with 'Perfect Dehumanization (The Answer?)', and this track right here is probably the second-best song off the album after 'Spheres Of Madness'. Talk about the perfect album opener, the song blasts off with a 10/10 riff that has obviously been inspired by Morbid Angel, and machine gun drums to give it the backbone. Then the mighty Sauron growls his way into the song with his great vocals. "Rise! And look at your face!" the first lyric line off the first track of the album, that'll be sure to stick in your head once you hear it.

That's basically what you'd expect with the rest of the album, every song opens with a catchy, memorable riff with the perfect drum beat to go along with it. It’s not repetitive though, the band manages to keep every song fresh and different. The musicality of the album his just perfect, great musicianship and song structures. All the songs are unique in their own way.

Now this I where I talk about the album’s disadvantages. Mainly the drums; the kick drum to be exact. There isn't really an issue with the drums at all, but my god, when I first heard this album, I was disgusted by the kick drum. Sounded extremely triggered and very high-pitched and clicky. Ear-piercing kick drum right there. But since then, I've been listening to the album over and over making myself look past the awful sound of the kick, I got used to it and now I barley even focus on the noise of it. Basically what I'm saying is that when you hear this album for the first time, the kick drum will probably bother you for a little while, and if you keep listening to the album again and again, you'll soon look past that and love the album regardless.

The other "issue" which really isn't an issue but needs to be discussed are the vocals. Sauron. Sauron is a great vocalist for his then age, and in general. The ability of the vox on this track are great, no fails there. It’s just the production and the dreadfulness of how he sounds on the album. Great vocal ability indeed, but they sound layered and slightly buried on here. Kind of like how you're kinda congested and you can talk, but your voice doesn't sound 100% great. That’s the best way I can describe the vocals on this album. Once again, good skill, but needs to be presented better.

Well to wrap it all up, this is a great and solid album with little fails. As I said before, if you're new to the album you'll most likely notice some flaws. But over time everything grows on you. Therefore, being the reason being why I don't give this one a perfect score. Good album, but a grower for some people.

It was one of those lazy winter nights when nothing could make me move my ass from the couch and then, I popped this little CD in my player’s hole and holy mother of all baseball bats, did those guys changed the shape of my jaw. It’s not like I expected some whiny melodies here, but “Nihility” simply knocked me down and made my head feel like a soccer ball kicked for 10 hours by 20 guys during power training. What’s even more amazing is that with the help of Decapitated I was able to achieve that artistic state of mind with only 35 min... Beaten up, bruised and exhausted I crawled to my player and clicked stop.

Not bad for four guys who can’t even enter a 21 and over club... I’m not going to praise the fact that these young men are still in their teens but showcase musical abilities on this record that will make contemporaries twice their age go nuts. From ‘Perfect Dehumanisation’ to ‘Symmetry of Zero’ you are exposed to a perfectly produced blistering assault that emphasizes the technical abilities and uncommon tightness of a band in such a young stage of its career.

Vitek (drums) must drive his neighbors insane; maniacal precision and speed mixed with uncommon breaks and arrangements must sound like chemical explosions cooked up by a mentally unstable kid recently released from a straightjacket. Not that Vogg (guitar) and Martin (bass) are staying behind and only fill the voids...

Brutal riffs and technical passages are enhanced by killer disharmonic solos that leave nothing less than aching and bleeding ears. All this musical chaos is intensified by the variety of Sauron’s low, guttural vocals that are not blown out of proportion and feel the music perfectly, keeping the faultless balance between all instruments.

The sky, or hell for that matter, is the limit for these guys and without a doubt their professional education pays off big time here, but I wonder just what music school they attend because as far as I can recall, no one taught me how to rip the shit out of my instrument...

Favorite songs? All of them. If you’ll find one that calls for less then a perfect description make sure you’re on the right medications...

Bottom Line: If you haven’t heard their first album, I forgive you, but if you miss “Nihility” don’t call yourself a fan of extreme music. Decapitated are something very special indeed and their latest child is nothing short of a masterpiece that marks the level of perfection I would expect at the dawn of the 21st century.