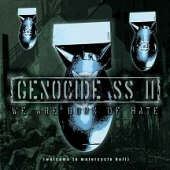 Type: Full-Length
Release Date: 2002
Label: Relapse Records
Genre: Hardcore, Punk
1 We Are Born Of Hate
2 Fuck The Enemy
3 Under Attack
4 Going Down To Die
5 Feed My Hate
6 Warchrist Supreme
7 Be My Bitch
8 Extinction Extinction
9 They Walked The Line
10 In The Midst Of The Aftermath
11 Blackout
12 Firestorm
13 Victory Or Genocide
14 Dead In The Shadows
15 Crazy Motorcycle
16 Devastating Power
17 Bloodred City Streets

First of all this CD shouldn’t even be here (in our database) but since Relapse decided to show the world this ‘masterpiece’ I felt like dropping in my 2 cents just to warn you not to make a mistake of buying it unless you are a fan of punk. Yes, this CD has got nothing to do with metal and as far as I’m concerned it should not even exist.

You see, as our members from Genocide SS II were born of hate, I was born to hate hardcore punk. Don’t get me wrong I do not hate it because of some stupid ideology or the people behind it, although its influence is growing after reading one of the worst lyrics ever, it’s the music. If a complicated song in this genre consists of 5 riffs and drums whooping the same tempo for 90% of the album and guys screaming ‘Kill, Kill, Kill’ then I’ll pass.

I was going to describe some of the music from this release here but it looks like I already did. I might not be too accurate but I don’t want to listen to it again just to give you exact titles but there are couple of songs that actually stand out from the rest and that’s why the score is so high. I think one was somewhere around track 7 and one near the end of this CD where I noticed a change. Not bad, can’t wait for the follow up.

Bottom Line: Unless you’re into hardcore punk stay away like evil from holy water.