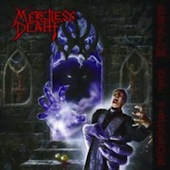 I thought that Merciless Death died a silent death after their second album, but now I have seen that a new full-length has been released; a good reason to rediscover Realm of Terror.

The boisterous protagonists make no bones about the fact that they have a strong affinity for the classic form of thrash metal. The promising intro is ominously growing and leads directly to the title track. Lo and behold, Merciless Death do not hesitate to demonstrate their anger. While achieving a very high degree of pressure, the song runs faster than the speed of light. The level of energy leaves no wishes open and the authentic attitude of the guys emphasizes the old-school feeling. But the most outstanding feature is the high velocity of this fanatic opener. Historically interested thrash fans might say that it is nothing but a lame cliché to start the album with the fastest track. Perhaps they like to explain us the song arrangement of albums like "Ride the Lightning" or "Master of Puppets". But, firstly, a high velocity thrash infusion is always a good thing, and, secondly, Merciless Death don't even think about to slow down the tempo during the further tracks.'Tombs of the Dead', for example, appears as another explosion of high-speed thrash. Thus, the title track is rather the blueprint for the following pieces than an unusually swift number. In light of this speed orgy, it comes as no surprise that the album clocks in after 28 minutes.

Anyway, Merciless Death have more aces up their sleeves. The power of their music is not only created by the velocity. It goes without saying that the mind-blowing riffs are of great relevance, too. Formations like Exodus, Dark Angel or, of course, Slayer, belong to the idols of the musicians and therefore it is only logical that they present edgy riffs and violent leads in abundance. The guitar is gnawing and sawing constantly, and the vehement production enables it to show its full force. No doubt, to achieve an attacking guitar work has stood in the foreground of the recording sessions. The six strings dominate the sound, but their regency is not at the expense of the other instruments or the vocals. Realm of Terror storms the barricades with a very suitable, aggressive sound. This becomes particularly evident at the beginning of 'The Gate'. Its excellent riff calls for war and makes us forget the only mediocre number, 'Fall to the Pentagram', a calm and rather senseless keyboard sound collage with crude vocals at the end. The vibrancy of this riff leaves the listener no opportunity to escape, but that's no problem, because every thrash metal maniac will highly enjoy this old-school massacre.

Of course, everybody is free to call these guys stubborn, intransigent or old-fashioned. It doesn't matter. We all know that opinions are like assholes, everybody has one. For those of you who like pure thrash without frills, the fittingly titled Realm of Terror guarantees half an hour of sonic wellness. Don't expect nice harmonies, any kind of fun or a lenient mentality. Just read the words of the band in the booklet ("This album is dedicated to all the people who said ... that this music is dead, may you rot in hell eternally"), see their Venom, Onslaught and Mercyful Fate shirts and you will suspect that the guys do not know any kind of fickleness. Even notorious doubters will know that they are absolutely right as soon as ferocious highlights like 'Death Warriors' break loose.