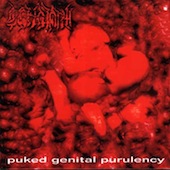 It’s a wonder how I haven’t reviewed this album yet as it’s not only legendary, but also something that I practically grew up with.

You see, Cenotaph are from Turkey. They’re from Ankara, and I’m from Istanbul, but the studio that this was recorded at is in Istanbul, and my band used to rehearse there as well. When this first came out, it was monumental, because the amount of brutal death metal bands in Turkey at that time were about zero.

And at first, even I was skeptical. How good could they be? These were the years when I was basically living off Cryptopsy and having Nile for breakfast. I was deep into the technical side of things back then (kind of still am) and I didn’t think these home-grown boys could manage to hold their own with the best of them.

I was wrong. Very wrong.

The album starts off with quite a bang. The first song, the title of which I am too lazy to write here, grooves, grinds and just pulverizes you. One of the first things to note is the sound - I am still actually kind of amazed that they were able to record this this well. Everything sounds excellent, and even with so much going on guitar and drum wise, everything is loud and clear. And the vocals. The vocals are fucking crazy. Batu is a legend in his own right - he’s the only original member of the band left at this point - but through thick and thin, he has always dug down deep and kept Cenoptah going. Love ‘em or hate ‘em, you can never take that away from them.

If I’m being completely honest, the last three tracks on here are my favorites. Especially when “Verbalized Opinions...” kicks in. Just batshit craziness from start to finish, this is one of the best tracks on here, hands down. The “hit” from the album, I’d say. Crazy guitar work, even crazier vocals, and outstanding drumming. Speaking of the drumming, I am so so happy to report that the drumming here is very creative, and not just your typical “let’s just blast through this entire section who gives a fuck” nonsense. The drum patterns are carefully thought out, compliment the vocals and guitars very well. Honestly, it’s a pleasure to listen to. While not on the level of say, Flo Mounier or anything like that, it doesn’t have to be. The creativeness of the drum parts is really special on this record.

The songs have more of an experimental feel to them, I mean there are a lot of things you’ll encounter that you just weren’t expecting. Songs twist and turn like eels. The guitar changes are real, they don’t fuck around at all. This album manages to keep you on your toes at all times.

“Sickened by His Own Pathologic Fancy of Collecting Ingots of Humanial Meat” has got to have one of the best middle sections of any death metal song, period. At 1:30 shit really hits the fan, the riffing, drumming, and absolutely insane vocals will leave you gasping for air. And the band actually do take it down a notch after a while, only to come back even fiercer and more brutal, finishing the song in one of the most punishing way imaginable. Just absolutely incredible and awesome song writing, the likes of which I am starting to miss in today’s metal.

To conclude, I would say definitely check this out. This is basically the Turkish version of "None So Vile" - it’s that good.

I also have to give a major shout out to Hammer Muzik who funded and released this back in the day on their own label. Hammer Muzik was, and still is, the metal record store in Istanbul. Whenever you walk in, still to this day, there is all sorts of filth blasting out of the store’s speakers. Absolutely legendary place which has been very monumental to the metal scene over here, so it's only natural that these were the guys that released this. And thank fuck they did.