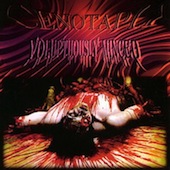 Cenotaph, one of the greatest units of brutal death metal hailing from the country of Turkey. Definitely the greatest death metal band from there. Their debut album Voluptuously Minced starts a direction in their future discography of albums.

Voluptuously Minced is most definitely an old school brutal death metal album. Not similar to other osdbm bands at the time such as Pyaemia, Disgorge, Mortal Decay, Dehumanized, or Malignancy, but still an old school bdm album; just with its own style, probably because it's from Turkey that it doesn't sound similar to the other arising osbdm acts at the time. The production isn't exactly amazing, it has that old school - unperfect sound that'll hit you immediately as soon has you hear it. The drumming is good, but at the same time it's slightly loud in the mix and doesn't exactly have a proper foundation. The kick drum can be pretty buried by the snare too a lot of the time. The guitars sound great but also grainy at the same time. Similar to the production, the guitars aren't 100% amazing, but in the end it works and is good. The riffs are pretty awesome, the best song being the opener 'Less Than Human Urinal', nice title too by the way, love it. The sound quality in everything may not be perfect, but the riffs, songwriting, and playing ability make up for those aspects instantly. The album as a whole is generally pretty fucking good and the issues aren't really even that much of an issue once you get used to the album.

On the other hand, the bass is absolutely flawless. It has a clear sound that's present and 100% hearable. The most notable bass part in the entire album is the beginning of 'Different Dimensional Pervertation'. The bass and the bass playing are perfect. The riffs are fun and bouncy, especially on tracks like 'Revenge', starts off slow and menacing, but then comes an awesome fun riff that'll get your head banging. 'Revenge' and 'Less Than Human Urinal' are most definitely the best songs on the album.

Although this album being my least favorite in Cenotaph's discography, it's still great and I appreciate it just as much as I do their other albums. Flawed in some respects, but overall a great effort. It has brutality, fun riffs, old school vibes, and wet brutal vocals. Voluptuously Minced is an awesome little album that features 22 minutes of Turkish brutality. Doesn't define the band's future work AT ALL (since all the albums following this one is very different), but a good start nonetheless.