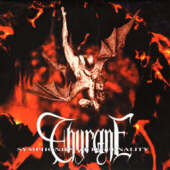 Finland's Thyrane is a band that takes the symphonic black metal genre to its extremes. "Symphonies of Infernality" is an album seething with brutal, calculating hatred, and pure aggression.

After the obligatory classical intro, ‘In the shape of a Demon’ blasts through the speakers and crushes any hope you may have had of a peaceful listening experience. This song is six minutes of awesome, blasting black metal with a few slower passages thrown in to give the song an epic feel. The keyboards are used sparingly in this song, and heighten the atmosphere of the music when they are used.

‘Envenomed Suicide Angels’ is my personal favorite track. This song is non-stop fury all the way through, but it doesn’t get boring and monotonous. It is in this track that what I feel is really great about this band shines through: They can play so intensely for so long, but they keep it interesting the whole way through, unlike some bands whom after hearing the first blasting minute of the song, you know what the next four will sound like. Blastmor's drum skills really deserve special mention in this, as they are constantly changing rhythm, but never losing their awesome power, and never losing touch with the rest of the instruments.

While "Symphonies of Infernality" is a raging symphonic black metal album (kinda like Dimmu Borgir on speed), it’s not without it's faults. Aside from some of the song titles being very cheesy, the keyboards often bothered me. While there are some great passages on here, there were many-a-times when I found myself wishing the keyboards would just stop because they were taking away from the awesome music going on beneath them because they were too high in the mix. I think that the main problem is that they use too many choir effects on the keyboards, which have been done by so many bands, it’s impossible to sound interesting and original, and it even gets annoying from time to time. This band definitely sounds its best when the keyboards are lower in the mix and the aggression is more in your face.

Bottom Line: A killer album by a great band. If you like fast, aggressive black metal with some synths, you'll like this. Like I said above, if they laid off the keyboards in some spots it would be great, but this album still rules.