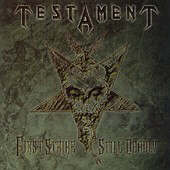 Type: Full-Length
Release Date: October 24th, 2001
Label: Spitfire Records
Genre: Classic, Thrash
1 First Strike Is Deadly
2 Into The Pit
3 Trial By Fire
4 Disciples Of The Watch
5 The Preacher
6 Burnt Offerings
7 Over The Wall
8 The New Order
9 The Haunting
10 Alone In The Dark
11 Reign Of Terror
MetalBite on YouTube

First formed as Legacy between 1983-1986, the band changed their name to Testament in 1986. This best of/compilation features selected tracks taken from their first two releases The Legacy and The New Order. The line-up here was Chuck Billy on vocals, Steve "Zetro" Souza on guest vocals, Alex Skolnick on lead guitars, Eric Peterson on rhythm guitar, Steve DiGiorgio on fretless bass and John Tempesta on drums. Not all of the original members were on this compilation. Their former bassist Greg Chrisitan and drummer Louis Clemente were absent from this compilation. Their replacements did a better job than the two previous members. They seemed to exhibit more talent and achieved a better outcome in their execution for these songs.

Thrash metal has always been Testament's genre of music. They've never changed their style even with the line-up changes over the years. So, it's safe to say that they never "sold out" like Metallica did. Of course, not their entire discography was entirely interesting but at least they stuck to their roots. This best of/compilation was a good idea though because it brought listeners back to where they originally used to be in terms of the selections from the first two releases. Though they cut out some parts from the originals and/or tailored a few riffs, the ingenious songs still held precedent with this newer best of recording.

Songs held much more crunch tone guitar riffs to them with the exception of the introduction of "Trial by Fire" and "Burnt Offerings." They did take out part of "Disciples of the Watch" but the execution was still well played out by Peterson, et al. These newer recordings I developed a liking to because of the overall intensity of the main riffs, way technical plus reverb enhanced style leads, right on cue drumming and finally, the main vocals as well as the guest vocals. I'd consider this compilation to be very mature and the riff contents to be more fluent than the originals.

All of the tracks that the band selected to be on this compilation were very good choices. Knowing of this band for more than 20 years, I have come to the conclusion that First Strike Still Deadly is one hell of a great concoction of remakes. Not a step backward but a better and more fluent examination of the band to see what they seemed to reiterate with these newer thrash metal remakes. The rhythm guitar parts were better than the originals because of their technicality which weren't as affluent as was on the first recordings. Peterson tailored some of the riffs though for the most part his strategies with doing this fit well into a more solid foundation.

The production sound of course was so much more audible and every vocal output as well as the instruments blended very well to form this phenomenal compilation. The leads by Skolnick were of course technical and he enhanced some of his leads by adding reverb to them. That was something different than the originals and in turn fortified the release in an astonishing way. Heavily jazz influenced leads but they mixed well with the rhythm guitar riffs. Everything on this compilation was astonishingly accurate and well executed. The tracks were extravagant, and the playing showed how talented this band was during this re-recording.

In terms of the lyrical concepts they seemed to focus mostly on religion, society and suffering. Very intriguing topics and well executed vocal outputs by Billy and guest vocalist Souza. Neither vocalist seemed to exhibit any high-pitched screams or yelling at all. It was good that the insert came with the lyrics attached to them because it's difficult to understand Billy's vocal outputs. His style of singing reflects a rougher throat whereas Souza seemed to show a different approach and acquired taste. Both of their efforts fit the music well much more so than on the originals. The songwriting was entirely intelligent and appropriate in accompanying the musical efforts.

It's difficult to understand why many listeners concluded that the original tracks were better than this best of/compilation. There's not a track on here to dislike. The intriguing guitar riff structures were so well compiled to a degree that has kept me listening to this entire compilation numerous times without it ever going stale. This compilation was so amazingly produced and well executed by all contributors. To give this compilation anything less than a perfect rating would do it a great injustice. If you are a fan of vintage thrash metal played to the point of perfection, then do yourself a favor and pick up this best of/compilation.

I was always one to view Testament as a somewhat trailing satellite in the wake of early thrash kings Metallica, Megadeth, Slayer, and Kreator. My metal needs were more than satisfied back then and Testament never seemed to offer anything really groundbreaking. I hadn’t truly embraced the true prowess of the Bay Area geniuses mainly because the early albums always seemed to have a muddy sound and generic feel. Maybe it’s just my old tapes that have been sitting on the shelf for over ten years, maybe not, they’re garbage now.

Eleven choice tracks from the violent and energetic first two albums completely redone and amazingly remonstered, this was an utter metal slap in the face! It’s one thing when some kick-ass new band takes you off your seat with one bad-ass track after another, and something completely indescribable hearing songs you know from before come to life and rip you apart with monstrous energy that you never knew lurked there! This stuff is 100% true, just like the early line-up, Skolnick steps back into the band for the arduous and intricate lead guitar parts, right alongside long-time axeman Eric Peterson. Tempesta’s aggressive drumming is now crystal clear with the sharp production, oh how I love modern technology!

The original songs are unworthy of bowing to the new versions. This is the album for Testament’s time capsule. 'Alone in the Dark' is absolutely breathtaking, with original demo-singer Steve Souza doing the vocals. He also does the screams on the very aggressive, Slayer-like, previously unreleased 'Reign of Terror'. I can not disagree with any track selections, though there was plenty room left on the disc for more, and hearing some more of my old favorites like the classic 'Curse of the Legions of Death' would have certainly sealed the lid on the godly album.

Bottom Line: Testament classics not only hold the test of time, they once again stand tall in today’s metal scene after a little refurbishing. This ought to be inspiration for their next studio album!