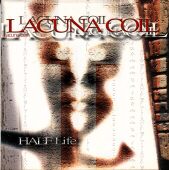 One of "Halflife's" purposes was to reveal Lacuna Coil's new and slightly different musical approach and entice to buy the upcoming "Unleashed Memories" album, but if you ask me the 5 songs on this EP hardly do the album justice in terms of fair representation. In fact, I would have been more likely not to buy the aforementioned album after hearing "Halflife", ...fortunately, that wasn't the case. Century Media was generous enough to tack on this EP to all new copies of "Unleashed Memories", which makes for a worthy buy altogether. The EP itself I would never recommend, and if you've got a regular copy of "Unleashed Memories" I wouldn't worry at all.

The one song that I want to restrain those comments from, however, is the breath-taking finale 'Stars', which, as far as I know is a cover song of some little-known British pop-group called Dubstar. On this track Lacuna Coil prove that a strong infusion of melancholy and feeling into a slower pop song produces some of the most beautiful music ever, and the chorus, in particular, is simply enchanting.

The core of the album lays in the songs 'Hyperfast' and the title-track, which both disappointed me with their overly long and watered-down Lacuna Coil style, granted 'Hyperfast' is much better and easier to sit through. Dare I say these were the songs that didn't make the grade for "Unleashed Memories"? If you ask me 'Senzafine' is one that shouldn't have made the grade for that album in the first place, but here on the EP we have ‘Senzafine’ with its pointless 2-minute intro 'Trance Awake'. It didn't do a thing for me. Maybe it's because I always press 'skip' on the second and third song that “Halflife”, like most EP's today, feels utterly incomplete when it's over. I don't recommend this at all.

Bottom Line: Only the most die-hard Lacuna Coil fan would want this. One good song and the rest is mediocrity.